Giving Some Late Thanks

I hope everyone had a safe and happy Thanksgiving.  My family of four had a nice little dinner to ourselves followed by an afternoon of putting up Christmas decorations.  My daughter is in quarantine for a couple of more days so we did not venture anywhere.  She was exposed at school, but has had zero symptoms.  I am very thankful for that.

Another thing I am thankful for are great bloggers like everyone's favorite Andrew McCutchen collector  Brian.  I was a lucky winner of one of his contests during the Saving Second Base event.  For guessing Justin Turner would hit the first double in the World Series, I won this beautiful Cody Bellinger patch card: 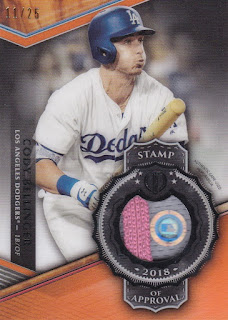 I love the Stamp of Approval relics from Tribute.  It is great to see there are some gamed used cards with jerseys that were actually worn during games.

Brian also slipped in some Cardinals in his package. 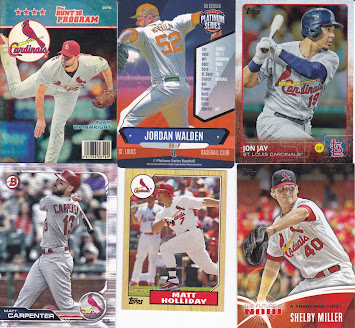 I have some of these already, but there is no shortage of Cardinals collectors to pass these on to.  The Walden card was a much needed hit from 2015 Platinum Series. 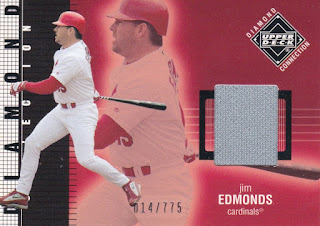 This is my 9th different Edmonds jersey/bat card.  I remember breaking 3 or 4 boxes of 2002 Upper Deck Diamond Connection trying to get the quad bat cards.  Multiple relic cards are some of my favorite Cardinals cards.
Thanks again Brian for the great cards and also running a wonderful blog!

Posted by CardinalsFan16 at 4:51 AM No comments:

Trade Full of All Stars

My latest batch of cards that arrived on Monday were courtesy of TCDB member eortiz01.  He managed to fill a pwe with a bunch of Cardinals all stars. 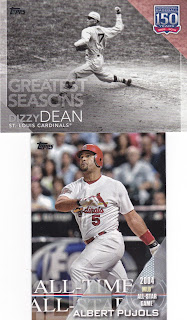 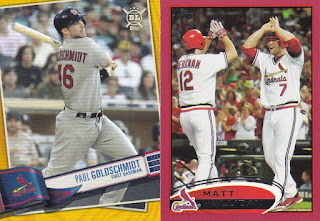 Goldschmidt made 6 All Star games with the Diamondbacks, but none so far with the Cardinals.  If their is a full season in 2021, I bet that will change.  Holliday made 4 of his 7 All Star appearances as a Cardinals.  The other 3 came as a Rockie.  I love the Berkman cameo on this 2012 Topps Red parallel.  Not sure which guy hit the home run that they are celebrating.  Lance only played 2 seasons in St. Louis, but managed to be an All Star in one of them.  Along with 2011, he appeared in 5 other games as an Astro. 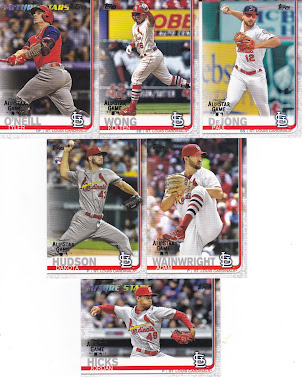 Only DeJong and Wainwright have been on All Star teams from this group, but they all get a 2019 Topps All Star game parallel card.  Nothing too exciting about these cards.  This is a parallel set I could do without it, but the collector in me will try to complete the team set.

Not much to write about today except for a pwe that arrived Saturday from TCDB member nwcardsupplies.  I have traded with him on 3 different sites over the years.  All have been top notch.  This time he sent me 2 cards of 2 different Cardinals. 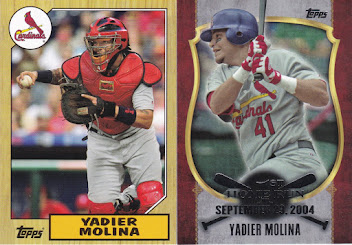 I am digging the 2020 Topps Choice Molina.  I admit I have a thing for the 1987 wood border.  I believe this is the silver version of the 2015 First Home Run insert.  I like the idea, but 1 would have been enough. 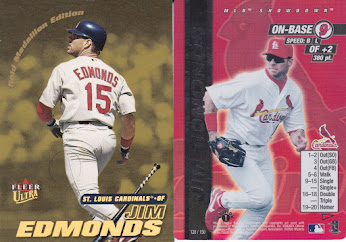 I read recently that MLB Showdown cards are seeing a rise in demand due to people playing during the pandemic.  I have not seen it, but I will gladly take a foil parallel anytime.  Edmonds has stated he would like to work with the Cardinals outfielders next year, but not as a full time coach.  I would be all for it if he could teach them how to hit.

The pwe trades continue to roll in.  Late last week I received one from TCDB member RedSoxChip that contained 7 cards, 6 for me and 1 for my son. 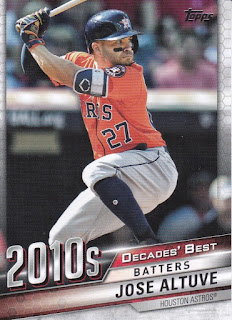 Hard to believe Altuve has been around for almost 10 years.  I did not realize how good he has been.  It will be interesting to see how he bounces back from the cheating scandal and a bad 2020 season.   This 2020 Update insert does a great job of highlighting all his accomplishments. 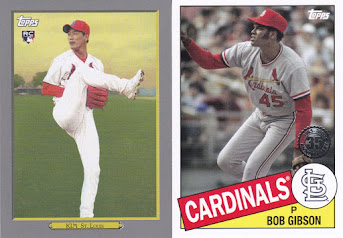 I added a couple of Update inserts to my collection.  The KK Turkey Red is nice, but I am a sucker for a HOFer on a classic design from my early days of collecting. 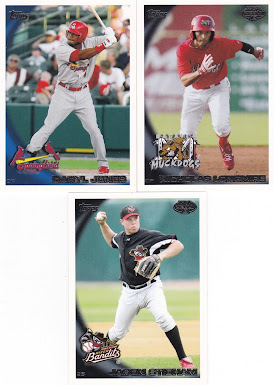 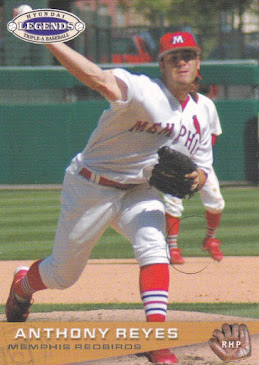 What is even better than minor league cards?  How about some from sets you did not know existed.  The Reyes card is from 2006 Grandstand Hyundai Triple A Legends set.  Not sure why it was broken up into 2 series.  Cardinals fans will remember his best for beating Justin Verlander in Game 1 of the 2006 World Series.  His career did not last long, but he continues to have a great story serving as a fire fighter in California.

Posted by CardinalsFan16 at 3:32 PM No comments:

Yesterday's post showed a bunch of Harrison Bader cards from a recent trade.  Today I  will show a handful of Ozzie Smith cards from TCDB member timriess.  He is a fellow Cardinals fan who collects Ozzie and Ray Lankford.  The man has great taste. 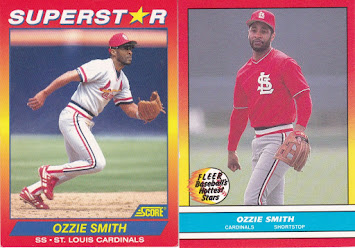 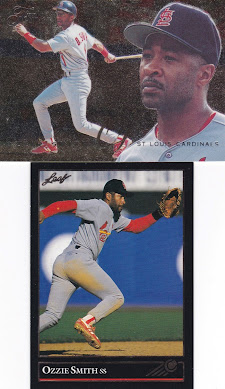 I don't know the percentage, but it does not seem like very many Ozzie cards show him batting.  The 1995 Flair is one of them.  I guess when you win 13 Gold Gloves most of your cards will show you in the field.  This was the last card I needed for my 1992 Leaf Black team set. 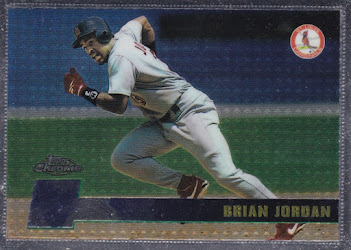 My only non Ozzie was this 1996 Topps Chrome Brian Jordan.  This card does a great job of capturing his hustling style of play.

As a player collector, there may come a time when you question whether you want to keep hoarding the same player's cards.  Whether the player is traded, leaves as a free agent, or done something wrong like PED use, there are many reasons to stop collecting someone.  Vince Coleman was my first player collection, but that came to a very quick halt when he signed with the Mets as a free agent.  I even took a break from my Ray Lankford collection after he was traded to the Padres.  It only last a few months though.

Last week I worked out a trade with TCDB member Burefreak.  Like myself, he collects with his son.  His son had a nice Harrison Bader collection, but decided to collect Paul Goldschmidt instead.  I swapped some Goldy doubles and a few other cards for a batch of Baders. 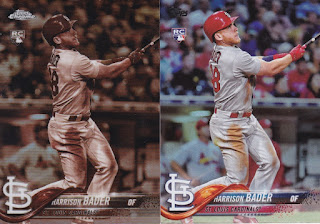 There were 2018 cards like a Sepia Refractor and a Topps Rainbow Foil. 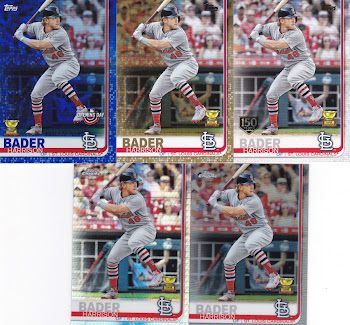 There were 2019 cards that shared the same photo.  Strange that Topps moved the Rookie Cup logo to the left side on the Opening Day Blue Foil. 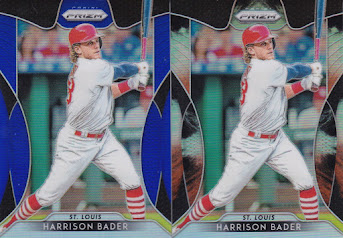 Maybe I should start a rainbow of the 2019 Panini Prizm cards.  I might have around 5 of the 20 some variations by now. 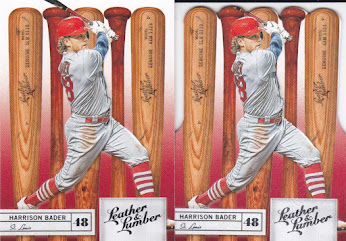 2019 Leather & Lumber used die cuts instead of color variations.  Looks like the photo may have been from the same at bat as the Prizm card. 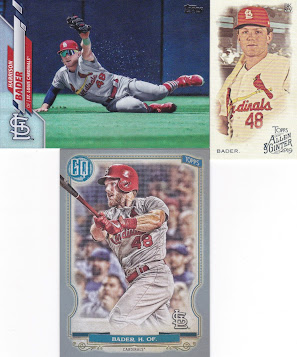 The last of the Baders including 2 2020 parallels and a 2019 mini.  I love the action shot on the Topps Rainbow Foil card. 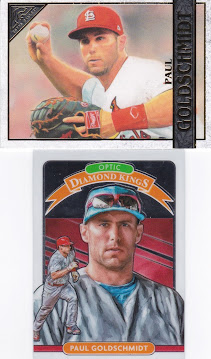 I did receive a couple of Goldscmidt cards back.  Still pecking away at 2020 base card sets. 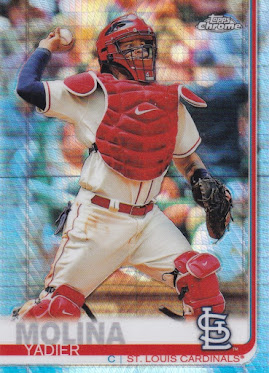 The last card I received was a 2019 Chrome Prism Refractor Molina.  He is a free agent, but I cannot see the Cardinals letting him go somewhere else.  I would prefer he only get a one year contract, but the Cardinals will most likely give him two.

I broke away from EBAY habit of buying into box breaks or Cardinals lots to look for a new Cardinals auto last week.  I had some money left over from my birthday a few weeks ago that was burning a hole in my pocket.  I set my sites higher than my usual $10-15 card this time.  My collection is missing autographs from 3 first basemen:  McGwire, Pujols, and Goldschmidt.  I decided to go the cheap route and get a Goldy. 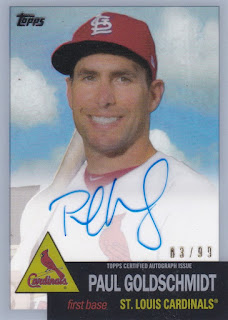 Besides being my first Goldscmidt auto, this is also my first Clearly Authentic card. I prefer action shots, but this card was too sweet to pass up. 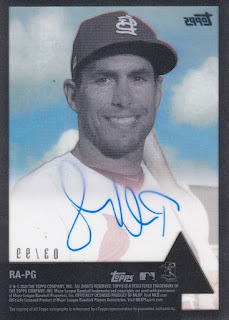 I love the see through type cards.  Topps did a great job with the design for this set.  There are a few other Cardinals in this set that are not quite as expensive as this card that I may try to add.  This one was around $27 total.
Posted by CardinalsFan16 at 11:56 AM No comments: