This Trade Was So Good

With all the trading I do on TCDB, I sometimes forget out the Trading Bases Group.  It is a great group of traders who are very easy to deal with.  About the only downfall is there is not a central website.  If you want to trade, you either search the message board or view each trader's website.  Last week I posted some Cubs for trade that I received in this lot.  Member Al S jumped on a handful of them and sent me some great Cardinals in return. 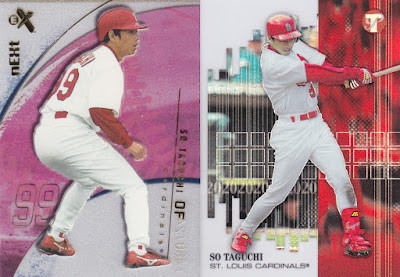 So Taguchi was the Cardinals answer to Ichiro.  He was nowhere near the player, but did play a key part on the 2006 World Series team as a fourth outfielder.  The 2002 EX card #ed to 2499 finished my team set.  The 2002 Pristine card is a refractor #ed to 700.  It was still in its original Topps case, but I cannot stand those.  So is now free to join the rest of my Pristine cards. 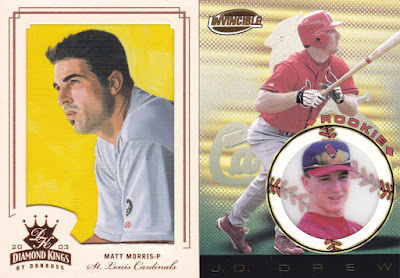 I am not a huge fan of the Diamond Kings framed parallels.  I have a few of them with very bad chips in the frame.  Topps did a better job with the Gypsy Queen cards.  I love the 1999 Invincible design.  I am all for team logos in the background, even if it is partially covered up.

Rounding out the trade were 3 cards featuring past greats.  The 2002 Topps Super Teams Retrofractor is numbered to 1967.  That is the year these 4 players won the World Series.  The 2005 Donruss Champions set included all sorts of players.  It featured current greats like Pujols, retired greats like Enos Slaughter, and common bench players like Roger Cedeno.  Guess which one I need for my team set.  Yep Cedeno.  The second Carlton card finished my 2005 Elite team set.  These cards do not scan the greatest due to the rainbow like finish, but they look great in hand.