Any Cardinals fan who watched the 2013 playoffs know what kind of postseason Michael Wacha had.  In the NLCS against the Dodgers, he beat Clayton Kershaw in Game 2 1-0, then beat him again in Game 6 9-0.  My wife's co-worker attended Game 6.  She is a baseball fan, but does not really care about the significance of the ticket stub.  While it is not in the greatest shape, it is an actual stub from the game that sent the Cardinals to the World Series.  With so many people buying tickets online, stubs are not as plentiful as they once were.  I had Wacha sign the stub at the Cardinals Caravan last month.  The auto was free and he even inscribed it 2013 NLCS MVP.

Posted by CardinalsFan16 at 2:08 PM No comments:

I open very few packs, but I do get the occasional blaster box from Wal-Mart.  It is hard to resist the first product of the year.  Here is what I have left from my box to trade:

Posted by CardinalsFan16 at 8:38 AM No comments:

What's In a Name

I do not spend a lot of money on autos or game used cards.  I like to find bargains of Cardinal players for under $10.  One exception was the 2009 SP Authentic Kyle McClellan By the Letter autos.   SP put out cards that spelled a player's name, team name or rookie.  McClellan is the only Cardinal I know of that has cards spelling his name.  I met him at a small card show back in 2008.  He was a nice as can be so I decided to try for this set.  The Y was the last one I needed, bought it off EBAY in November 2014.  I believe the most I paid for any of these was around $12 delivered.  All cards are numbered to 30.

Hello Blog World!  After a few months of reading blogs and trading with a few bloggers, I have decided to join in the fun.  As you can tell from the title, I am a St. Louis Cardinals fan.  I was 6 years old when the Cardinals won the World Series in 1982.  I do not remember much about that season.  It was in 1985 that I really became a fan.  I loved the style of Whitey Ball the Cardinals played that year and quickly became a fan of Vince Coleman.  I opened my first pack of baseball cards in 1986 and pulled a Topps Coleman Record Breaker card.  I loved collecting all things Cardinals and especially Coleman until he signed with the Mets in 1990.  If you followed baseball in the late 1980s you know how heated a rivalry the Cardinals and Mets had.  I was crushed that Coleman would choose to sign with them.  I stopped collecting his cards, but still collected Cardinals.  In August of 1990, Ray Lankford was called up.  Having the same first name as me, I followed Lankford closely.  He became my new favorite player and the center piece of my collection.  I have over 90% of his cards ever made including 1/1s.  Here is my first Lankford card.  I bought it for 50 cents back in 1991 from a kid on my school bus: 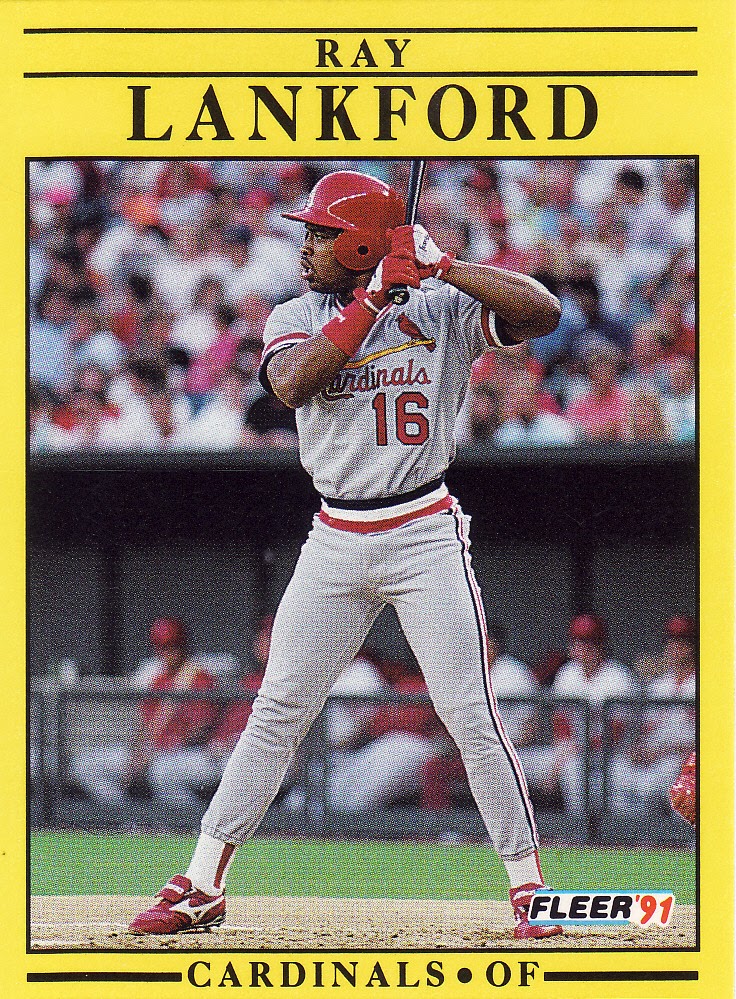 I look foward to talking to other bloggers and maybe making some trades.