It's always nice to get Christmas Cards

Over the last week or so many bloggers have been posting about various Christmas gifts they have received in the form of cards or other sports related items.  I did not receive a truck load of cards, but did get a nice envelope in the mail last week from fellow Cardinals collector Eric.

I met Eric on The Bench a few years ago and we have traded Cardinals duplicates numerous times.  I have 2 or 3 other Cardinals fans that provide a trading ground for my many doubles.  It is very rare to receive a flat rate box full of Cardinals that I need, but with a little work most of them find good homes.  Whether it be through trades or having my wife give them out to her students, there is always some Cardinals fan who can use a 1991 Fleer team set. 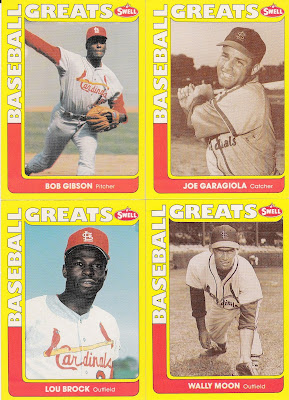 Speaking of yellow bordered sets, Eric included these four 1991 Swell cards.  Yes that is the same Joe Garagiola that used to broadcast Saturday afternoon baseball with Vin Scully.  Hands down the best broadcast duo ever. 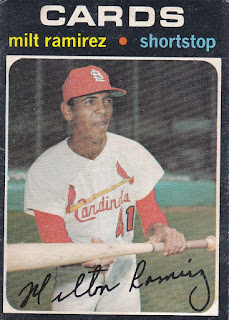 I cannot say I know who Milt Ramirez was, but it is nice to mark his 1971 Topps card off my wantlist.  It is off centered and has some soft corners, but is in great shape otherwise. 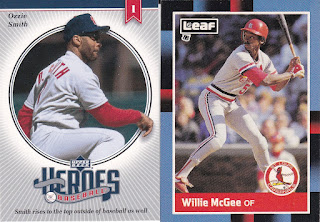 I have said it before, but I have a soft spot for members of the 1985 Cardinals team.  Not much power on that team, but man could they run.  Maybe Don Dekinger can rest easier now that the Royals won a World Series without his help.

I have expressed my dislike for mini cards before, but these 3 are not all bad.  Ronnie Belliard was the starting second baseman in the 2006 World Series.  I cannot say I remember much about him other than the long dread locks.  The Shelby Miller Bowman Chrome is a refractor.  I hope he can continue his 2015 success that he had in Atlanta in his new home of Arizona.  The Simmons is a 1978 Hostess card that I have not ever seen before.  If it was not for Jonny Bench,  Simmons would have been more of a household name during the mid to late 1970s. 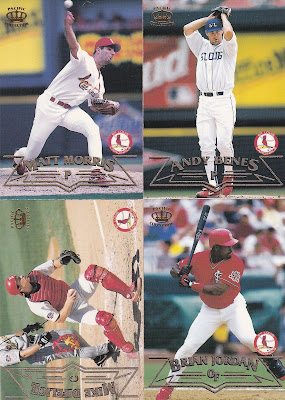 The 1998 Pacific set has some nice photography, but the busy nameplate at the bottom takes away from the full bleed photos.  It would be nice if Topps came out with a set that featured the entire team like backup catchers.  I doubt if there are too many Mike Difelice Cardinals cards out there. 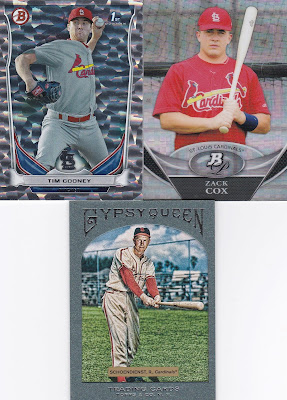 I have always like the Bowman Silver Ice cards.  They are really sharp in person and look great signed in blue sharpie.  With the signing of Mike Leake yesterday, it looks like Tim Cooney will be back in Triple A until a starting pitcher gets injured.  Bowman Xfractors are not quite as nice.  For some reason the checkered/box pattern reminds me of the Minecraft game.  Zack Cox has been one of the few recent #1 draft picks that did not pan out for the Cardinals.  He was traded to the Marlins at the 2012 trade deadline for Edward Mujica.  The Red Schoendienst is a Green Framed Gypsy Queen card.  Hard to go wrong with a Hall of Famer who still attends spring training even though he is over 90 years old.

It took until December to get #2

Collecting a player who retired in 2004 can have its challenges.  Ray Lankford was a popular Cardinal, but not on a national level.  Topps has not continued to produce cards of him like other retired Cardinals such as Ozzie Smith and Stan Musial.  I can count on two hands the number of new cards he has appeared on since 2005, and that is including the different versions of Leaf Memories from 2012-2014.

I also have a rather complete Lankford collection.  By my best count using Beckett Collections, I have 916 of a possible 981 Lankford cards produced including 1 of 1s.   As a result, it can be months before I see a Lankford card I need be listed for sale or offered for trade.  I do my daily check of auctions sites and see the same cards listed over and over again, but I keep going back hoping to find something I need.  My search paid off in August when I found this card on COMC: 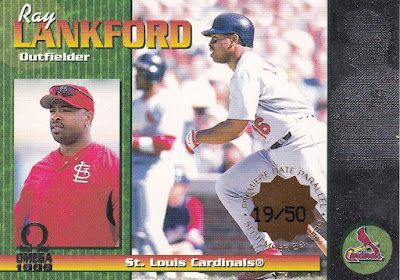 I do not think I could hit the buy it now button quick enough.  This is the 2nd card I have crossed off my Lankford wantlist this year. It fits nicely in my binder along side the other 3 versions of this card: 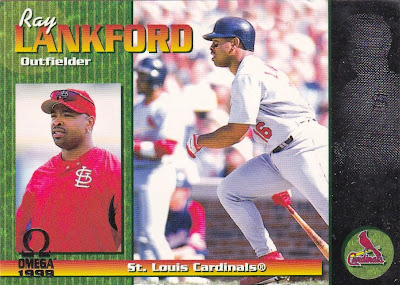 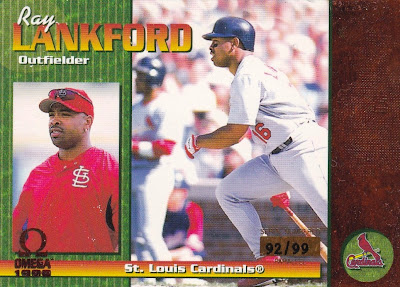 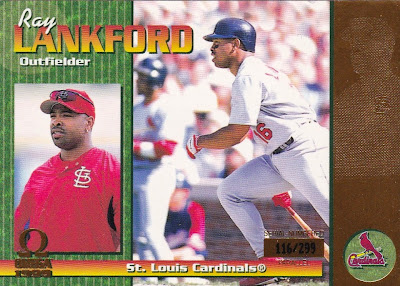 I was torn on whether on not to spend $3 to have it shipped to me right away, but I decided to wait until the Black Friday free shipping promotion.  I waited 6 months to even find a Lankford I needed, so the 3 month wait on shipping was not too bad.
Posted by CardinalsFan16 at 12:30 PM 2 comments:

I have seen several blogs post about what they bought from COMC during the Black Friday sale.  I have been waiting patiently for the free shipping promotion since I bought a card in early August.  $3 to ship one card is not that far out of line with some EBAY rates, but when you know there is a good chance you can get free shipping, it pays to wait.  So I spent the weekend looking for 19 more cards from my various Cardinals wantlist.


I started my search by trying to find autos of Cardinals players I needed that cost less than $3. 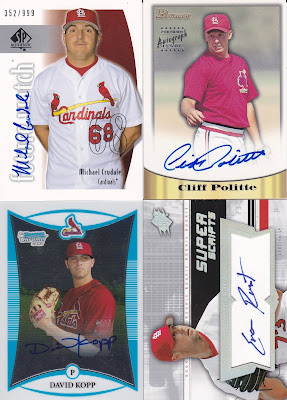 I paid less than $2 for the Crudale, Kopp, and Rust.  Cliff Politte cost me $2.75, but it is the silver foil version.  None of these 4 pitchers had a long MLB career, although Politte was a member of the 2005 White Sox World Series team.  These four brought my total of Cardinals certified autos to 195 different players.

I have many base cards on my team wantlist dating back to 1970 that are not too hard to find.  There are a lot of common cards on that list along with some short print cards and some oddballs.  I decided to try to find cards that I do not see on trade lists very often, or when they do pop up on auction sites are over priced.  I set my spending limit at 50 cents per card.  My search led me to Sportflics. 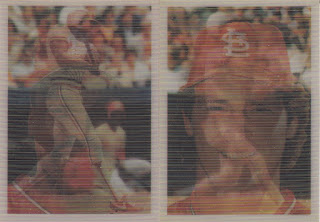 I bought my first pack of baseball cards in 1986.  Topps, Fleer, and Donruss were the only cards I had heard about until I attended a card show in early 1987.  I was shocked to see a dealer had Sportsflics.  My 10 year old self was fascinated by these cards that would show different images when you moved them.  Though they are not very expensive, I cannot tell you the last time I saw a dealer that had these for sale at a show.  I bought these 2 1986 cards of Vince Coleman and Tom Herr for 38 cents each. 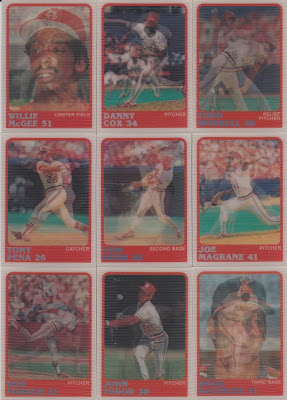 I did not have any Cardinals from the 1988 Sportflics set.  I know these do not scan the greatest, but you may notice the Doug Decinces card in the lower right looks like an Angels card.  Doug finished his career in 1987 by playing 4 games with St. Louis.  The back of the card has a Cardinals emblem, so I guess it is considered part of the set.  All nine of these cards were also 38 cents each. 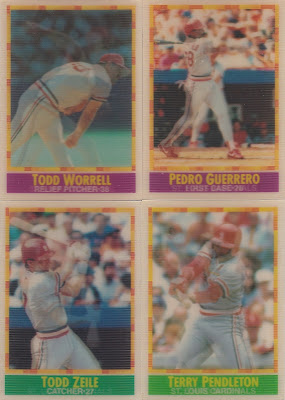 I did not realize Sportflics made a set in 1990.  I was even more surprised to find I already had 2 Cardinals from this set.  Keeping with the theme, these four cards also cost 38 cents each.  I only need the Ozzie Smith to complete the team set, but did not want to pay the $1.50 price tag for it.

No More Mafia In St. Louis

So the Cardinals finally made a move today, trading Jon Jay to the Padres in exchange for Jedd Gyorko and close to $7 million.  I will admit I do not know much about Gyorko other that what I read this morning, but it seems like the Cardinals should do ok with the deal.  They were needing a utility infielder who could hit left handed pitching better than Kolten Wong.  I hope Matheny plays him enough that Peralta and Wong do not wear down this next year like they did in 2015.  Gyorko also comes a lot cheaper than Ben Zobrist, although he is not the same caliber of player.  If he can hit .270 and hit 10-12 home runs, he will be a good pickup. 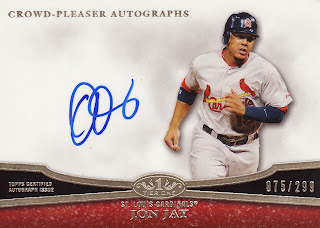 Jon Jay was a serviceable outfielder for the last few seasons.  He was the starting centerfielder for the 2011 World Series team after Colby Rasmus was traded in July.  He hits close to .300 and plays a decent centerfield, but has little power.  With the emergence of Randal Grichuk, Tommy Pham, and Stephen Piscotty, Jay saw very little playing time the second half of 2015.

With the trade of Jay and Tony Cruz last week, the Cardinals no longer have any members of the self proclaimed "Memphis Mafia".  David Freese, Allen Craig, Daniel Descalso, Jay, and Cruz all played together in Memphis before being promoted to St. Louis. Excluding Cruz, the other four played big roles in the 2011 World Series.  At least they all will have a World Series ring when they retire.
Posted by CardinalsFan16 at 12:26 PM No comments: