Two weeks ago today I left for my summer vacation.  I have 2 brothers who live north of Denver that I try to visit every two years.  Living in southern Illinois, it is about a 15 hour drive along I70 to get there.  I decided to take a slight detour through Springfield, MO and catch 2 Springfield Cardinals games. I had purchased a special ticket package back in January to watch batting practice that had to be used on a Monday-Thursday game.  This trip was the perfect time to coordinate everything into one outing.


We arrived at Hammonds Field for batting practice at 4:00 Thursday.  I am not for sure about other minor league teams, but none of the Cardinals clubs open gates for fans to see batting practice.  It was neat to see the team go through some conditioning drills before batting practice began.   My kids ended up getting 5 baseballs that were hit in various parts of the stadium, but only one still had the Texas League logo still legible.  I will get to what we used that ball for later.  The Cardinals #1 prospect Alex Reyes was promoted to Springfield the day before, so we had good timing with our trip.  After practice, he stopped and signed 2 cards for me and a ROMLB on the sweet spot.  My son shares the same first name, so we have been following Reyes since he was in Peoria last year.  From what little I talked to him, he seems to be down to Earth for a 20 year old baseball player.  He thanked us for coming a long way to see them play and wished us safe travels the rest of our vacation.

After watching batting practice, we had to exit the stadium for 30 minutes before gates opened to the public.  We waited in line for our mini Matt Carpenter bobbleheads, then entered the stadium.  Every night the Cardinals have 1 or 2 players at each gate to sign autographs or take pictures.  Breyvic Valera was signing at on of the gates. 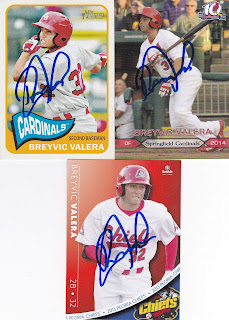 I love the way Topps Heritage Minors cards look when autographed.  The other 2 cards are from minor league team sets.  Valera is a utility player with zero power, but has a great ability to make contact.  I doubt he will ever make the Majors, but should have a nice minor league career.  I did not get any other autos that night on cards.  My son did get a mini helmet signed after the game by Patrick Wisdom and Michael Ohlman.  I did have the pleasure of being picked to participate in the pop fly challenge after the third inning.  Myself, another gentelman, and his 10 year old daughter were giving 5 pop flys to catch from a sling shot.  If we caught all of them, we would each get a  Dominos pizza.  All 3 of us were in the outfield will the staff fired the balls from a sling shot by one of the dugouts.  I never got one my way.  The other guy had a chance at all 5, catching 3.  No pizza for me.  The Cardinals won the game with a walk off double in the bottom of the ninth by a score of 3-2.  Although it was low scoring, it was a fun game to watch .

We returned for Friday night's game right when the gates opened.  Mike O'Neill was signing at one of the gates. 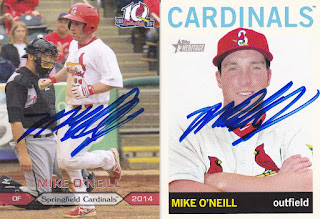 O'Neill is a Valera clone, except he is left handed.  He has reached Triple A before, but is still in Double A as a 27 year old.  I do not think he will make the Majors either, at least not with the Cardinals.

Mike Mayers was signing at a different gate.  He had pitched the night before, going 6 innings and giving up 2 runs.  He was a third round draft choice in 2013, and has some upside.  He might make the big leagues, but I would guess as a reliever. Aledmys Diaz is the Cuban shortstop the Cardinals signed to an $8 million contract.  After 2 years, he has not advanced past Double A.  I got his auto before the game.  Matt Williams is another utility infielder.  He played second base each game and made a couple of nice plays, but does not hit enough to make it to St. Louis.  He also signed before the game.

After we got Mayers auto, my son and I headed to the last gate to see who was signing there.  As luck would have it, it was Alex Reyes.  I was shocked to see no one was waiting for him.  I guess people did not know who he is since he was wearing sunglasses and a pull over.  He signed three more cards for me to go along with the 2 the night before. 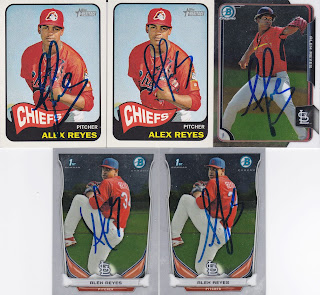 We were able to talk to Reyes for a couple of minutes again.  My son asked him if he remembered us from Peoria last year.  Reyes winked and said sure and signed my son's ball he got from the night before.  Alex also took a nice picture with my Alex. 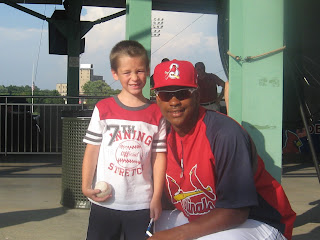 I hope to get this picture signed sometime in the future.  It would look great on my son's wall next to the one the two of them took in Peoria last year.

After we left Reyes, we headed down by the first base line so Alex could get more autos on his ball.  He got 12 autos total.  I also got a few other cards signed. 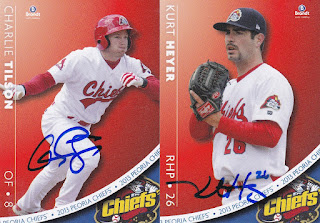 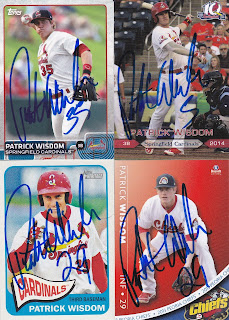 The Cardinals drafted Patrick Wisdom as the 53rd overall pick in 2012.  He has a great glove at 3rd base and a lot of power, but has been prone to strikeouts.  Early this year he was sent to the instructional league to work on his hitting.  Since his return he has been hitting a lot better.  I think he will get promoted to Triple A next year and have a decent chance to make St. Louis in a year or two if he can continue to hit .280 and play great defense.

Overall it was a great 2 nights at Springfield.  My kids were a little disappointed we did not get to see the fireworks after Friday nights game.  There was a rain delay in the 6th inning that lasted 1.5 hours.  Having a 2 hour drive that night to get to our hotel, we left shortly after the rain started.  It was a good thing too, because the game did not get over until 11:30.  Springfield had a 2-1 lead going into the 9th inning, but gave up 7 runs and lost.

Posted by CardinalsFan16 at 4:04 PM No comments:

I returned home from vacation this past weekend to find a package from Matt who writes The 5 B's blog.  Matt won a recent contest I had and decided to send a thank you, even though none was required. 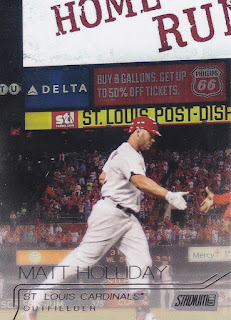 I love the look of this 2015 Stadium Club Matt Holliday.  Stadium Club continues to provide great photography that you do not get with other Topps issues.  I do not have any other Cardinals base from this set, so this was a nice start.

These 2014 Allen & Ginter cards also have a nice look, minus the full bleed photo of Stadium Club.  I was sad to see Shelby Miller traded, but glad he did make the All-Star team.  Wish the Braves could give him more run support so his record reflected how well he has pitched. 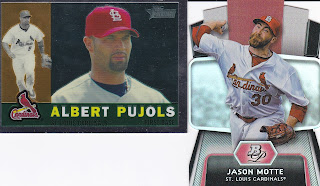 Matt included 2 nice inserts of a couple of former Cardinals.  Pujols is having a nice bounce back year, as is Motte.  Motte is a great guy off the field, having started his K Cancer foundation.  I am sure some of you have seen the backwards K shirts in your favorite team colors.  Motte helped start that program while he was recovering from Tommy John surgery in 2013.

Great cards Matt, thanks for the kind note also.