One of my Sunday rituals is to sit down and pay bills.  I log everything in a spreadsheet to make sure all bills get paid.  In this same spreadsheet, I also log my baseball card expenses.  I was somewhat shocked to see that I have spent less than $50 on EBAY this year.  I have been to a few more card shows than usual, but even that expense is below $50.

Being well below my card budget for the year, I decided to search EBAY for some PC cards.  As usual, I found no Ray Lankford cards I did not have.  My next search was for autographed cards of Cardinals.  With quite a few new sets out in the last couple of months I had a few different options. 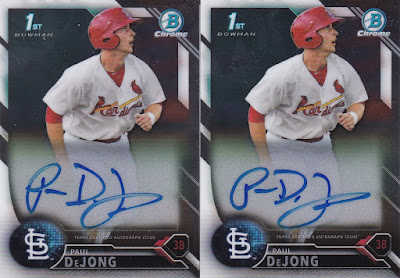 Dejong was the Cardinals 4th round draft pick last year out of Illinois State.  He played 10 games in rookie ball before being promoted to Peoria to finish the year.  He skipped High A Palm Beach this year and went directly to Double A Springfield.  He was named a Texas League All Star last week.  He is one of the few Cardinals prospects with power potential.  From what I have heard, he has a good glove at third also.

I usually do not buy 2 of the same auto, but single cards were selling for $4-5 plus shipping.  These 2 cost me $8 total.  If there is another Cardinals fan that would like one of these, lmk.
Posted by CardinalsFan16 at 12:34 PM No comments:

Here it is almost the end of June and I am ashamed to say I have only been to 2 baseball games this year.  I highlighted my first trip in this post .  A week ago Sunday the family and I made the 3 hour drive to Peoria to watch the Chiefs play.  Ever since the Chiefs became the Cardinals low A affiliate in 2013, we try to make it to a few games each year.  Sundays is always a good day for many reasons.  Kid's tickets are only $5, it is player poster day, you can play catch on the field before the game, kids get to run the bases after the game, and it is team autograph day.  Most of the Chiefs participate in the 15 minute auto session except for the starting pitcher and some of the other starting pitchers who may be charting in the stands that day.

After my son and I played catch, we had went over to the auto line.  In years past the autographs were for anyone, but this year the club changed it to kids 15 and under.  I have no problem with this as the kids should come first.  If an adult wants an auto, most players will still sign during warmups or after the game. 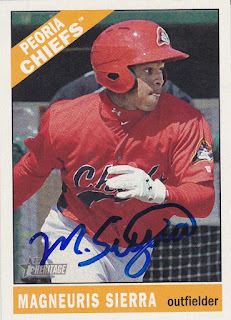 Sierra was the Cardinals minor league position player of the year in 2014.  He is small in stature, but plays a great centerfield and hits for a good average.  I would guess he may make the majors as a fourth outfielder.  He was named as a replacement to the Midwest League All Star team.

Edmudo Sosa is a shortstop who displayed good power in rookie ball in 2015.  He is rated in the Cardinals top 10 prospects and made the Midwest League All Star team this year.  It will be interesting to see if he can stay at shortstop as he matures.

These were the only cards we got signed, but my son also had a Midwest League ball that he got signed by the 20 players in the auto line.  He also got the player poster of Eli Alvarez signed, but it was to big to scan.  The Chiefs won the game 3 to 1 behind a good outing from starter Ryan Helsley.   He allowed 1 run in 6 innings.  He also made the All Star team. 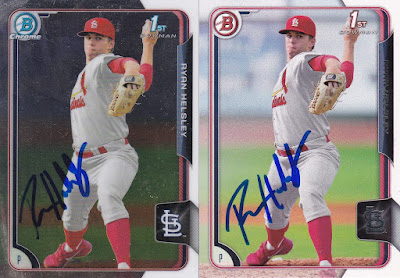 Helsley signed autos after the game.  While I was waiting for the kids to run the bases, I had him sign these 2 cards.

Jake Woodford was charting pitches one section over from our seats.  He was nice enough so sign after the game.  Like the other 3 players in this post, he also made the All Star team.  Woodford was the 39th player selected in the 2015 draft.

It was a fun evening at the ball park.  We got all the cards signed that we brought, the Chiefs won, and the game was over in a quick 2 hours and 30 minutes.
Posted by CardinalsFan16 at 12:41 PM No comments:

Non Cards from the Card Show

The main reason I went to the card show on June 5 was to get a couple of autos from former Cardinals John Tudor and Bill Campbell.  I have been slowly working on a 1985 World Series team ball for about 7 years now.  The 1985 team is the first one I really remember following.  I was only 6 when the Cardinals won the Series in 1982, so I have very few memories of that team other than Bruce Sutter striking out Gorman Thomas to end Game 7.

The 1985 team was fun to watch.  Vince Coleman, Willie McGee, and Ozzie Smith ran wild on the bases while Jack Clark provided what little power the team had.  The pitching staff featured 2 21 game winners in John Tudor and Joaquin Andujar and a 18 game winner Danny Cox.  The team also played great defense, with Smith and McGee winning gold gloves. 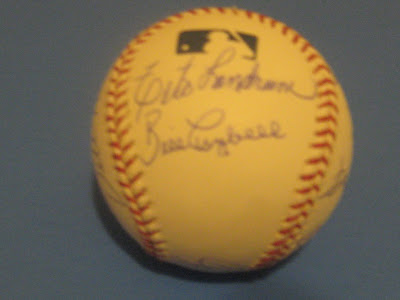 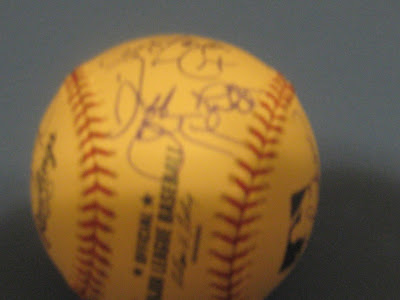 My camera takes blurry pics of baseballs no matter what settings I use.  I now have a total of 12 signatures on the ball.  I know it will never be complete dues to the deaths of Andujar, Bob Forsch, and Darrell Porter, but it is still a fun little project to add to ever now and then.  Best part of getting these autos was I had a gift certificate that covered the entire cost.  On a side note, I was shocked to see someone have Campbell sign at least 10 different cards at $5 a pop.

I did purchase 1 other item at the show besides cards and the signatures.  The day before the show, the Cardinals had a bobblehead giveaway featuring Adam Wainwright and Yadier Molina after the final out of the 2006 World Series. 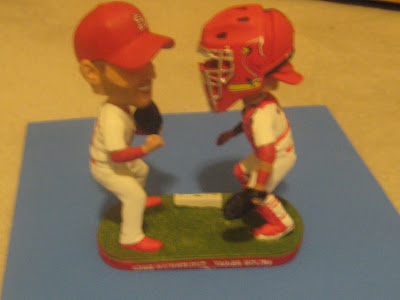 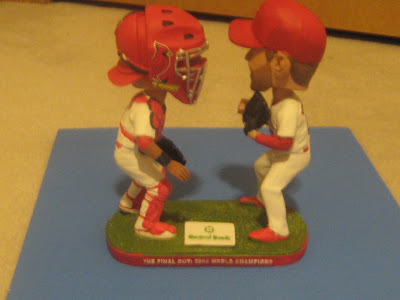 I have an autographed 16x20 picture of this pose, so I thought the bobblehead would look good next to it.  A lot of dealers had these for $40-45.  I was able to talk one down to $35 as he was packing them up right before the show closed.
Posted by CardinalsFan16 at 11:38 AM 3 comments:

I had a rare weekend off from baseball/softball games on June 4 and 5, so the family took a quick trip to St. Louis for a little bit of shopping and a card show.  Actually my wife and kids shopped, I spent 2 hours at a card show.  I was a little disappointed my 7 year old son did not want to go to the show and help dig through dime boxes, but the wife bribed him with a trip to Barnes & Noble and ice cream so I went alone.

I had this card show on my calendar for a few months because 2 former Cardinals were signing autos.  I will leave those details for another post.  I was able to get through both auto lines in 15 minutes, so I plenty of time to go through the tables.   It was a little of a downer finding out the dealer I bought all of these cards from was not at the show, but there were a few others with discount boxes to go through.  I ended up spending $7 for 70 cards from 1 dealer.  Unlike my last few dime box purchases, all of the cards were Cardinals. 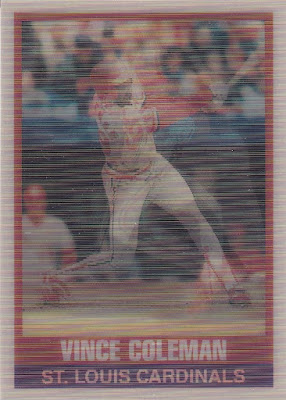 I am a sucker for the Sportflics line.  I was unsure if I had this card, but did need it after checking my wantlist. 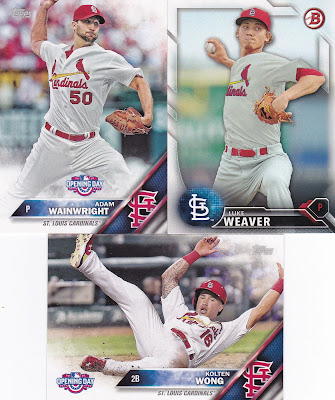 The dealer has a lot of newer base cards for a quarter or 50 cents each, so I was surprised to find these 3 2016 cards in the dime box.  Action photos do not get much better than the Wong slide. 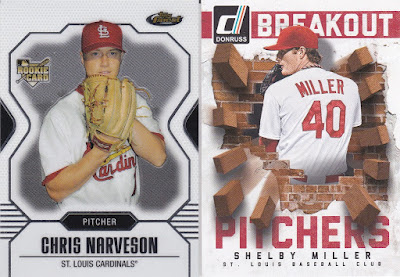 There were not too many Cardinal inserts in the box, but I did find this Shelby Miller.  The Narveson is a photo variation from 2007 Finest that is numbered to 439. 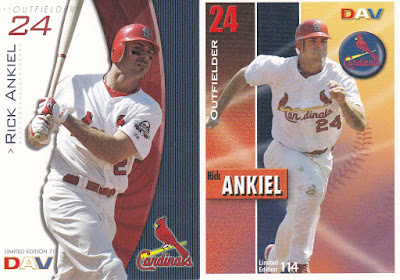 Last but not least were a bunch of 2008 and 2009 DAV cards.  I believe these sets were stadium give aways that several other teams do also.  Both years were missing 3 cards to complete the sets: Pujols, Molina, and Wainwright.  I guess that gives me something to look for at the next show.

It is amazing how quickly this year has flown by.  It seems time has went from Christmas to Spring Training to school being out.  I hope the summer slows down some, or at least I can find a spare moment or two to enjoy some baseball whether it be going to a game, watching the Cardinals on TV, or trading cards.

Both my kid's games were rained out last night so I had time to open a trade envelope I received on Wednesday from Trading Bases Member Ron B.  Ron and I have an ongoing trade were I send him Pirates and Yankees and he sends Cardinals.  I believe this is the 3rd or 4th package I have received from him this year. 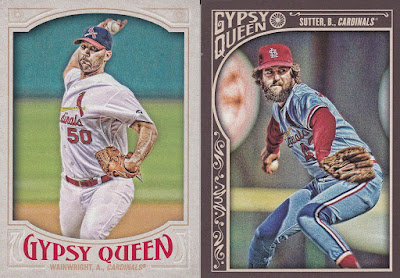 Wainwright has pitched better his last few outings, but is still not the pitcher he was before.  Father Time may be catching up to him.  The Sutter is a shortprint from 2015. 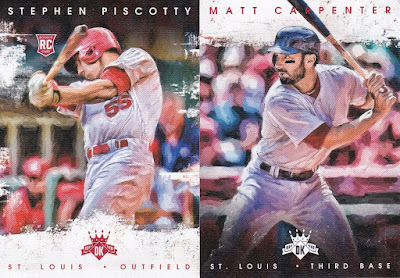 I have said it before, but Panini did well with the painted looks on this year's Diamond Kings.  The Piscotty is a photo variation. 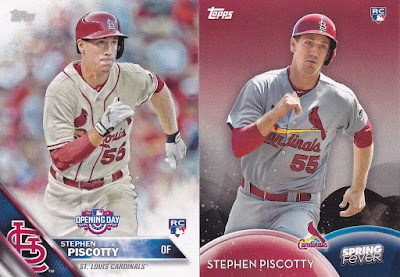 Piscotty has settled into the cleanup role the last week and done a nice job.  He has out hit the former Cardinals rightfielder while making about $23 million less. 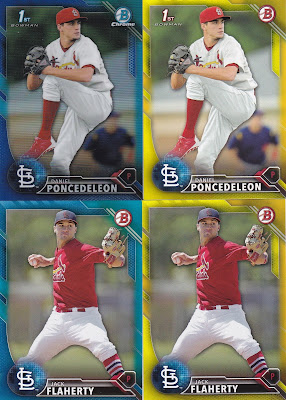 I am a Bowman fan from the base set to Bowman Draft, but I wish they would leave the Chrome prospects out of the base set.  It makes it very confusing when trying to decide what set a card belongs to.  The colored parallels look great, especially the blue chrome refractors.

It would not be a trade package without some Yadi.  The images from the 2015 Topps Rainbow Foil and 2016 Topps Gold look to be taken from the same game, maybe a few seconds apart. 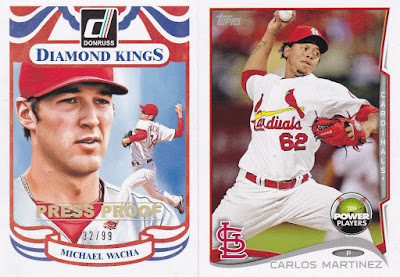 Wacha and Martinez both made the All Star team last year, but are having a tougher go around this year.  Not for sure if hitters are starting to figure their stuff out, or if the strain from a full season has them down. 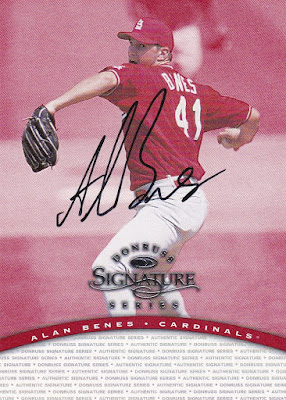 Normally I save autos and game used for the last pic, but I already had this Benes card and the final card was unexpected. 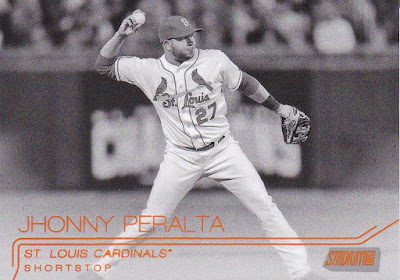 Ron slipped this 2015 Stadium Club orange parallel in the package without my knowledge.  Although it is not numbered, Topps states the print run is only 17 copies.  The orange foil pops out better in person.  Peralta should be back by the end of the month.  It will be interesting to see how the Cardinals juggle him, Diaz, Carpenter, and Wong around on the infield.
Posted by CardinalsFan16 at 12:37 PM No comments: