Freebie From the Bench

Besides making trades within the blogging community, I also trade/receive cards from a couple of trading groups, The Bench and Trading Bases.  I have been a member of The Bench since 2003 and have completed close to 500 trades.  It is a safe and well ran site with lots of nice features like a trade manager.  I have never been deceived or not received a trade made through the site.  Unlike the Beckett site, it is free to join.

Every now and then one of the moderators from the group receives a box to break from one of the card companies.  He is very generous with these cards, giving them to other members who ask for them.  Topps sent a box of Heritage Minors that yielded some nice Cardinals including a blue border insert, a peach insert, and this game used card: 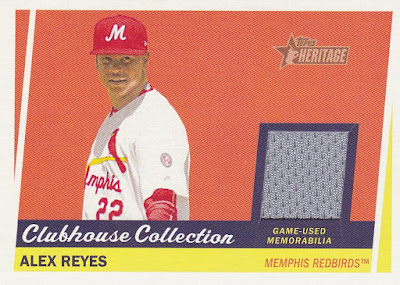 I would have been happy with one of the colored inserts, but was lucky enough to receive the Reyes.  It did not stay in my collection long though, as my son claimed it.  It is sitting on his dresser next to an autographed ball Reyes gave him.  Reyes should have a nice career ahead of him as long as he stays away from off field issues.  If he can cut down on his walk rate he should be a solid #1 or #2 starter.
Posted by CardinalsFan16 at 11:56 AM No comments:

Nothing too exciting has been going on in my card universe.  It has been a few months since I been to a card show.  Summer activities have limited my time to trade, but things should be changing before too long.  Only 1 more week of soccer left to go, then no more sports until January.  I do find time each day to browse my saved EBAY searches.  Last week I was able to snag a new Cardinals auto. 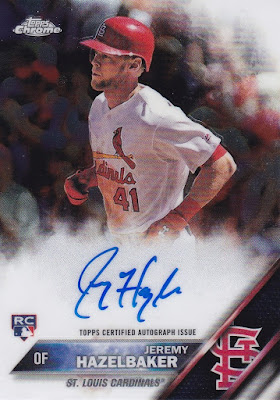 When Chrome first came out, this card was going for $10-12.  I got mine for $4.50 delivered.  It helps the season is over and Hazelbaker cooled down quite a bit from his hot start.  He also has other autos in Triple Threads and the newly released Topps Update.  Barring injury, he should be a fourth outfielder next year who can provide some power off the bench and play good defense.
Posted by CardinalsFan16 at 11:28 AM 1 comment:

Brought to You by the #2

It is always nice to be #1.  Whether you are talking about sports or just daily life situations,  most people want to be first.  I know my 2 children are always fighting to be first out the door or first person in line.  Wish I knew why that does not translate when it comes to being first one done brushing their teeth or first done with their homework.  If another parent knows the secret to either one of those, please let me know.

There are times when it is ok to be #2.  With Halloween coming up soon, it may not be a bad idea to be the second person through the haunted house.  Being a second child has some advantages because the first child is the guinea pig for the stupid things first time parents try. 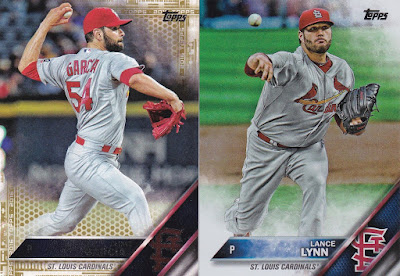 Here are 2 2016 Topps inserts, a gold Jaime Garcia and a Foil Lance Lynn.  These 2 starting pitchers were suppose to be part of the 2016 rotation, but Lynn had Tommy John surgery before spring training.  Garcia managed to stay healthy for the first time in a long time, but became ineffective and lost his spot in the rotation to Alex Reyes. 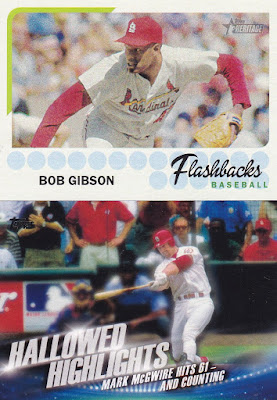 The package included 2 more 2016 inserts.  Bob Gibson is arguably the greatest pitcher in the Cardinals history, although Dizzy Dean would be a close second.  Gibson won 2 World Series with the Cardinals in 1964 and 1967.  He also won 2 Cy Young awards in 1968 and 1970.  McGwire also has 2 World Series rings, although neither came as a player for the Cardinals.  He was a member of the A's 1988 team, and was the hitting coach for the 2011 Cardinals. 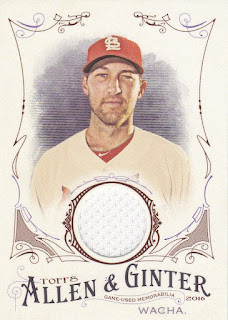 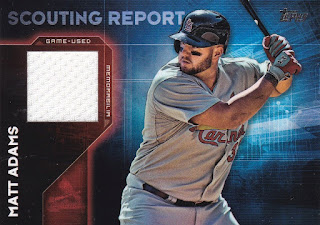 One common thing I can say about Wacha and Adams is their uniform numbers both end in 2, 52 and 32.  Both missed a good part of the 2016 season with injuries and are not guaranteed to return to their former roles in 2017.  Wacha may become a reliever due to his shoulder issues, while Adams may not even be a Cardinal.  I hope that is not the case, but if Matt Carpenter becomes the full time first baseman Adams will be the odd man out.
Posted by CardinalsFan16 at 12:57 PM No comments:

My last post brought back some memories from the 2006 World Series.  This was the first Cardinals championship that I have a good remembrance of.  I was all of 6 years old in 1982 when the Cardinals defeated the Brewers.  About the only thing I can recall from that Series was how goofy Darrell Porter looked with his glasses.  I watched or listened to all the games in the 2006 playoffs.  I was not able to watch Adam Wainwright strike out Carlos Beltran to end the NLCS, but was sitting on my couch when he struck out Bradon Inge to win the Series.

Fast forward 5 more years and a lot of Cardinals fans remember the 2011 World Series.  I know it was only 5 years ago, but it was such a memorable Series a lot of baseball fans in general recall David Freese's walk off home run in Game 6.  A trade package I received over the weekend reminded me of a couple of other players who played a key role in Game 6. 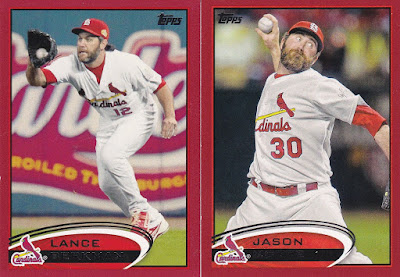 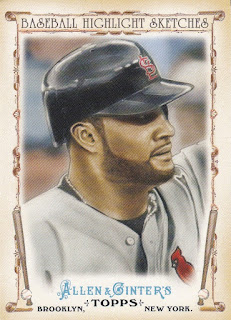 I received a few other cards in the trade.  Pujols did not play a huge role in the 2011 Series, but it did mark his last game as a Cardinal. 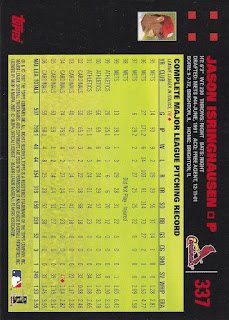 Jason Isringhausen did not play in any World Series with the Cardinals, but does have a ring from 2006.  Adam Wainwright was the closer during the 2006 playoffs due to Izzy's injury. 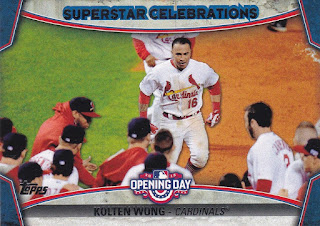 Kolten Wong is remembered for his pickoff during the 2013 World Series against the Red Sox.  I hope he sees more consistent playing time next year.  I have a soft spot for Cardinals players who wear #16.

2016 was not kind to the Cardinals.  Bad defense, lots of strikeouts, and inconsistent pitching led to a long and frustrating season.  The team always remained to stay close to the wild card, but ended up 1 game shy of the playoffs.  They ended the season at their high water mark of 10 games over .500 .

2016 did mark the 10th anniversary of the 2006 World Series team.  The Cardinals had quite a few promotional giveaways to celebrate their 10th championship that year.  One such was this past Saturday when it was David Eckstein bobblehead day. 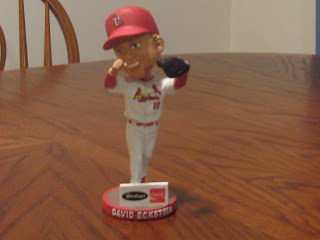 I was not able to attend the game, but had a cousin who was nice enough to snag me one.  The pose is from the end of Game 5 after the Cardinals won.  Eckstein won the Series MVP, although I would argue Scott Rolen was just as worthy. 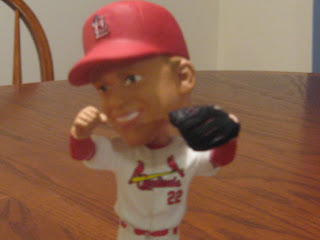 A closer look at the head shows it is a little off center, but for free I will not argue.  I will have to do some reorganizing to find a spot on my shelf for Eckstein, or put up another shelf.  I still have my dual Wainwright/Molina bobblehead sitting in the box that I got earlier this summer.  I guess this is a good problem to have.

The Cardinals season came to a close yesterday, the first time in 6 years they will not be in the post season.  This saved me some grief by not having to suffer through a playoff loss again, but is stinks all the same.  At least there was one feel good story from the weekend. 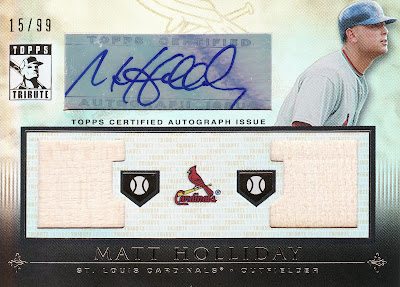 Matt Holliday had been on the DL since mid August with a broken bone in his hand.  Knowing the Cardinals will not pick up his $17 million option for next year, he requested to be activated for the weekend series.  He fought back tears on Friday night to hit a pinch hit home run.  Saturday brought another pitch hit single and RBI, but his hand was too swollen to hit Sunday.  The fans chanted his name during the 8th inning hoping to get another chance to see him.  He was inserted in the top of the ninth and stayed in the the field for 1 pitch. He took the field by himself to a standing ovation.

I always felt Holliday was under appreciated by a lot of Cardinals fans because of his big contract.  For the better part of his 7 years in St. Louis, he hit .300 with 20 home runs and 100 rbis each season.  Hard to argue with that production.  He was also a big contributor to the community, helping to start the Homers for Health program.  I would like to see him return, but doubt he will accept the pay cut and lesser role.  His tenure in St. Louis included 3 All Star games and a World Series title.
Posted by CardinalsFan16 at 12:36 PM 3 comments: