Had a Blast on Vacation

It has been almost 2 weeks since my last post, but vacation will do that to a blogger.  The family and I left on Friday July 20 and headed to Colorado to see 2 of my brothers.  Along with doing cool things like hiking in Boulder, seeing the Dead Sea Scrolls at the Denver Museum, and spending an entire afternoon at Dave & Busters, we watched a Rockies game and took a tour of Coors Field.  The game was Tuesday the 24th against the Astros.  I did not remember my camera that day, but nothing too note worthy happened other that sitting through an hour rain delay to start the game when only a few drops of rain fell.  We left in the top of the 10th with the score tied at 2.  Good thing we did because traffic would have been horrible 15 minutes later after the Astros scored 6 in the top of the 10th.  Denver traffic is bad, but after a game it is worse.

We took the tour on Thursday afternoon and once again the camera was left in the van.  I would highly recommend the tour to anyone who has a chance.  For $12, we saw the dugout, walked on the warning track, and got to go inside the visitor's clubhouse (only because there was no game that day).  We left Colorado after the tour headed to Springfield, MO for a Double A Cardinals game on Friday night.  Springfield is not really on the direct route back to Illinois, but we were out west and would not have a better chance to make it there this year.  We did run into a bad thunderstorm in Kansas that included hail and wind that knocked over 3 semis, but no harm was done to our van.

I did have this game scheduled into our vacation due to a theme ticket night at the ball park.  It was Christmas in July all weekend with the Cardinals wearing some awful looking red and blue jerseys.  That was no the reason we went.  With the purchase of a special $16 box seat (which ended up being in the front row down the first base line), we received an Adam Wainwright bobblehead. 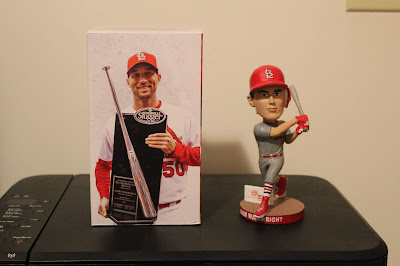 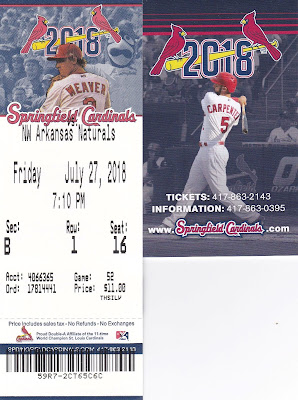 I always save my ticket stubs and make sure to grab a pocket schedule.  The Cardinals do a great job of featuring former players who made it to the majors. 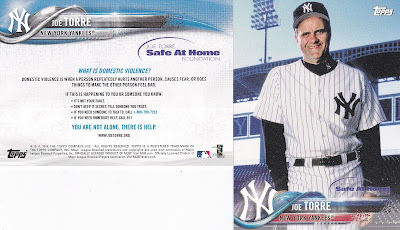 4 card packs of Topps Series 1 were handed out at the gate along with this Joe Torre card.  I have 2 of these if anyone would like one.

Of course my son and I did some autographing.  We did not have cards for very many players, so I was not expecting too much. 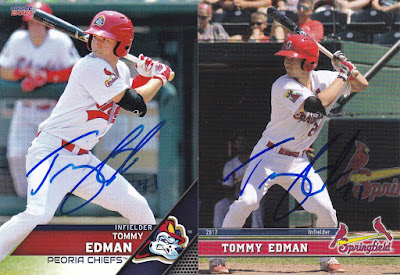 Tommy Edman was on the DL, but still dressed and warmed up with the starters.  I see him taking over Greg Garcia's role in a year or two.  Decent glove with a little of left handed pop of the bench who can play any infield spot other than first. 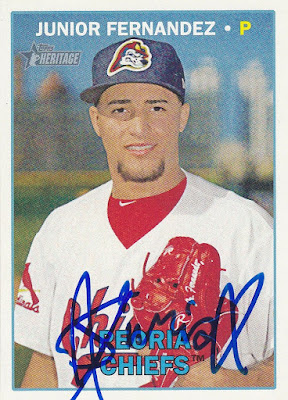 We got Junior Fernandez when he was walking to the dugout before the national anthem.  If he can stay healthy, he should follow the line of starting pitchers to Memphis next year and maybe the Cardinals bullpen.

The game itself was not very good as Springfield lost 10-0.  The next morning we headed back to Illinois for a quick stop at home before out next game.  More on that in the next post.

Trade Package During the All Star Game

It was an exciting All Star game last night, although I did not watch it all.  I had it on through the 7th inning.  After Trevor Story hit the tying home run, I turned my attention to a trade envelope I received from TCDB member pjdionne12.  Not that the cards were not great, but I should have kept watching.  Here are the cards that held my attention. 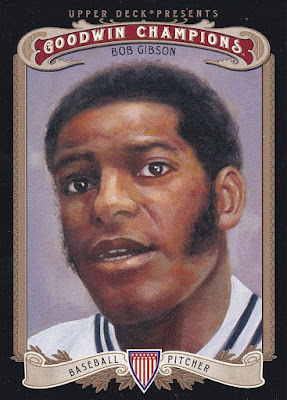 If it was not for Gibson's awesome sideburns, this would be a pretty boring card.  Goodwin Champs is not one of the Upper Deck brands that I miss. 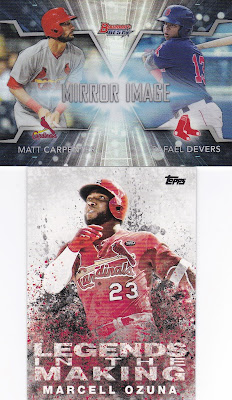 I always like the Mirror Image inserts, although I find Carpenter and Devers to be a weird combination.  Carp has not been a full time third baseman for a few seasons now.  Even when he was, he was not very good defensively.  Ozuna has a long way to go before he becomes a legend in a Cardinals uniform.  It would be great to see him catch fire for a month or so in the second half and carry the team. 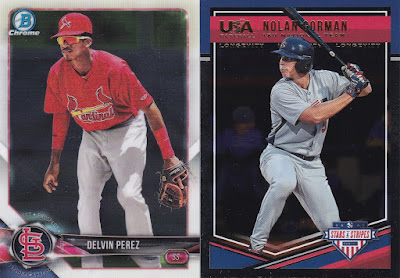 Perez is finally starting to have some success after being the Cardinals #1 draft pick in 2016.  He is hitting close to .280 in short season State College.  He should jump to low A Peoria by the start of next year.  Nolan Gorman was the Cardinals first pick in this year's draft, becoming the first player born in 2000 to be drafted.  He is off to a great start in Johnson City hitting .302 with 7 home runs in 23 games.  He will be one of the Cardinals top 5 prospects by the end of the year.
Posted by CardinalsFan16 at 10:49 AM No comments:

The mailman has been nice to me this week.  So far I have received a trade envelope each day.  Monday's package came from TCDB member captawesome81.  I often wonder how people come up with user names.  Mine is fairly simple. rl16 stands for my favorite player Ray Lankford and his uniform number 16.  Enough rambling, on to the cards. 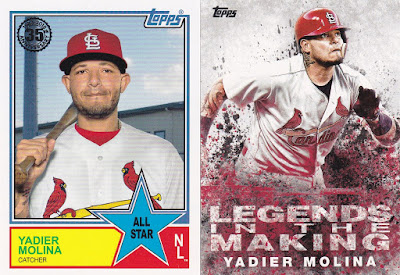 Molina will appear in his 9th All Star game tonight.  He was late replacement for the injured Buster Posey.  I wonder if his gold chest protector will show up tonight, or if he will be taking any pictures like last year. 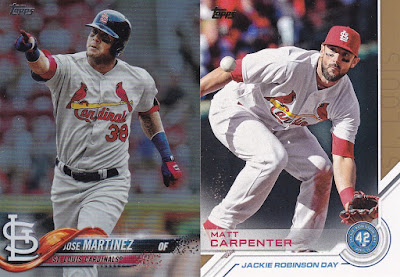 It will be interesting to see what happens to Jose Martinez now that Mike Matheny is gone.  I think new manager Mike Shildt values defense more than Mathey does, which does not bode well for Jose.  He would be better served being a DH. 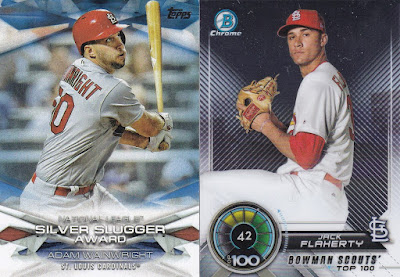 I would love to see Flaherty have a strong second half this year, much like what Luke Weaver did last year.  He has the stuff, but has been prone to the home run.  The Cardinals will need him to contribute since Wainwright may not pitch again.  Even if he does, I doubt he will be a very effective starter. 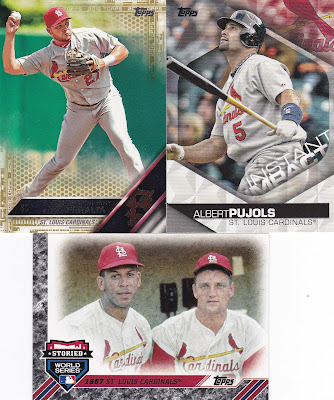 Does it bother anyone else that Topps is still making Pujols cards in a Cardinals uniform even though he has been an Angel since the 2012 season?  I would be surprised to see many Stanton cards in a Marlins uniform in a year or two.  Turn the page Topps.
Posted by CardinalsFan16 at 10:01 AM No comments:

Trades Are Rolling In

It has been nice to have enough spare time the last week to strike up some trades.  I should have 6 or 7 trades coming in before next weekend when I leave for vacation.  2 arrived yesterday with a few Cardinals wants. 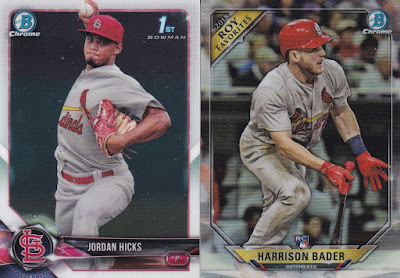 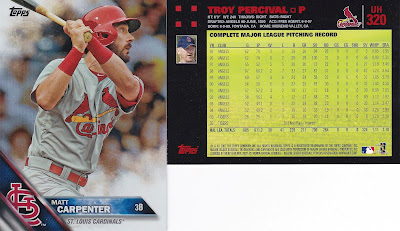 TCDB member Noy sent me a couple of 2018 Bowman Chrome cards along with a 2016 Foil Matt Carpenter.  These 3 have been bright spots so far on an otherwise run of the mill team.  Hicks bring the heat every time he appears in relief, Bader plays excellent defense and hits with some power, and Carp has turned his season around after a slow start. 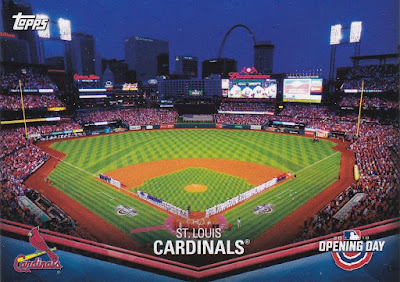 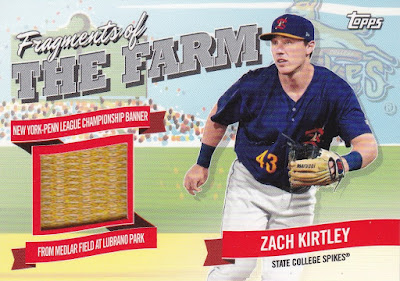 Along with the 2007 Update Red Back Percival in the first scan, TCDB member jimetal7212 sent me a couple of great inserts.  I love the shot on the 2018 Opening Day insert.  This was from the 2017 opening night game against the Cubs.  The 2018 Pro Debut Fragments card is rather unique.  I cannot remember seeing a card with a piece of a banner on it.  This one is very thick.
Posted by CardinalsFan16 at 11:08 AM 1 comment:

I knew the odds were not great to receive an auto from the Stadium Club group break, but I was hoping to get one.  The card board gods were not with me for the break, but I did find the auto I wanted on EBAY a day later. 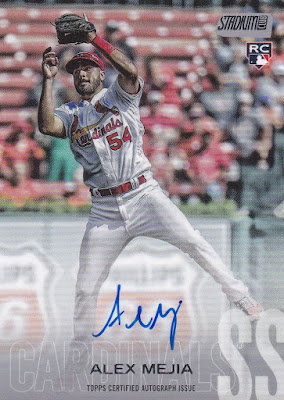 Mejia may not even get a call up this year, but this is his first certified auto not counting an Elite Extra Edition card.  This one is much nicer and was only $3.70 delivered.  His auto is very similar to the in person ones I got a few weeks ago in Memphis. 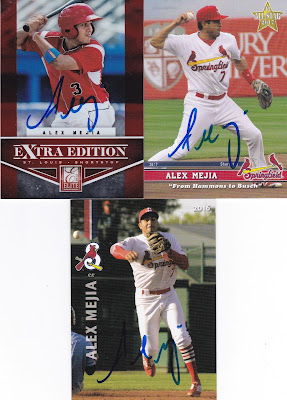 I was fortunate to join a recent group break ran by Trevor from Bump and Run Cards.  He busted 2 hobby boxes of 2018 Stadium Club, 1 box of 2018 Diamond Kings, and a blaster of 2018 Topps Series 2.  I picked the Cardinals and received the Tigers as my random team.  I will spare you the Tiger scans and go straight to the Cardinals. 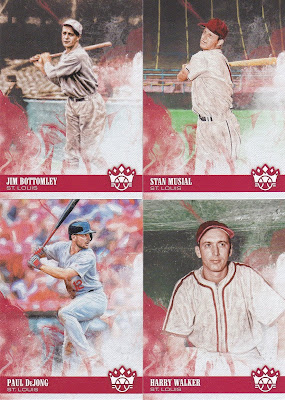 My spoils from the DK break were these 4 base cards.  I had the Walker from an earlier trade, but the other 3 were welcome additions. 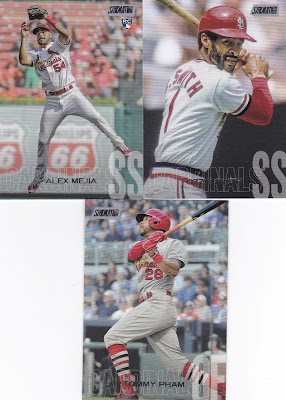 The main reason I joined the break was the Stadium Club cards.  As usual, the photography did not disappoint.  It was nice to see Mejia included in the set.  He only played a handful of games last year as a rookie utility infielder, but he did not have any cards other than a Topps Now and a Series 2 card. 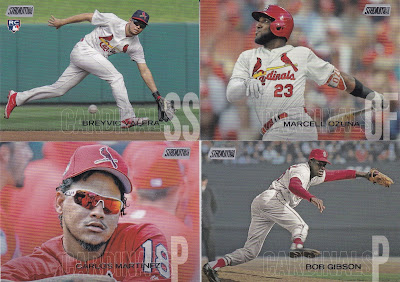 The Gibson is my favorite of this group.  Martinez's delivery is often compared to Gibson.  It would have been cool to have a card with him in his follow through.  Maybe next year.

These 3 were my favorites of the break.  For the last few years there has been a shot of the St. Louis skyline as one of the players round third after a home run.  Fowler gets the honor this year.  The Bader is my favorite of all. 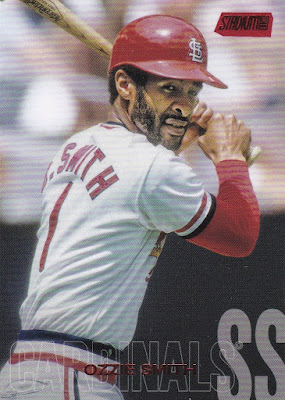 My only insert was this red foil Ozzie.  These make nice looking cards to go along with the Cardinals colors.

While I did not receive any major hits, I was happy with the break.  I received 11 of 14 Cardinals base out of the Stadium Club boxes.  The Diamond Kings was a little shy, but that is the way breaks go sometimes.   Thanks Trevor for the setting up the break!
Posted by CardinalsFan16 at 11:16 AM No comments:

O What a Trade!

There are certain brands of cards that seem to be hard for me to track down.  Late 1990s Topps Chrome and just about any Topps Finest are the first two that come to mind.  Another from the 1980s is Topps O-PEE-CHEE.  I am not sure if it is because of the Canadian ties, or just because collectors did not open many due to the similarity to base Topps sets.  Either way, it is nice to find someone who has a stack to trade.  TCDB member belijr sent me a few Cardinals earlier this week. 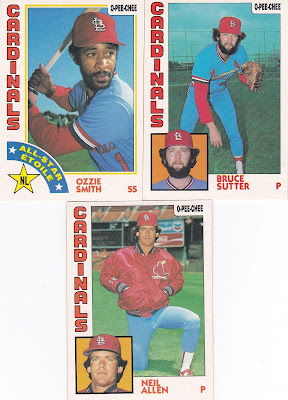 1984 is not one of my favorite designs.  The vertical nameplate and photo box seem to stand out more than the photo itself.  You do not see too many guys rocking the warm up jackets like Neil Allen anymore.  Seems like the hooded sweatshirt has taken its place. 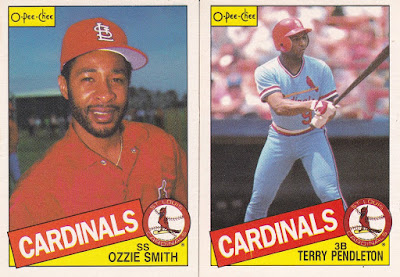 The 1985 design improved by leaps and bounds.  I like to see the team logo on cards, and the name plate reminds me of a pennant. 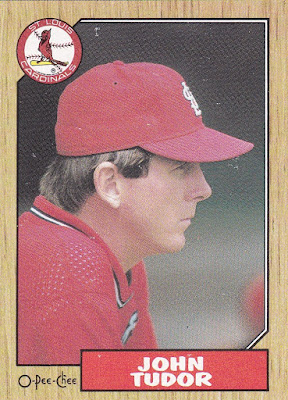 My favorite design of the 1980s is 1987.  It is very hard to find a collector who would mistake the wood grain border for some other year. 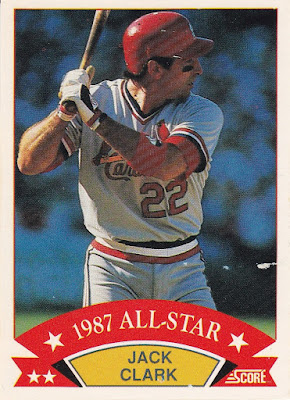 This 1988 Score Box Card was the only non OPC card in the package.  I am not sure if these cards were inserted in packs, or part of the box like a Topps Box Bottom card.  Maybe my weekend card project will be to find out.
Posted by CardinalsFan16 at 11:08 AM 1 comment: