One of my most frequent trading partners is Kevin M, who runs the Trading Bases group.  It is more of an open ended type of deal.  I will find a few nice Mets cards for him at a show, while he seems to send a 100 count box of Cardinals my way every month or so.  I may not need them all, but I still like going through the box.  I received the latest box on Saturday.  It had a very 1994 feel to it. 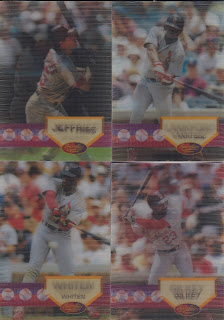 It might be the kid in me, but I have always liked Sportflics.  The "magic motion"  cards are just fun to play with.  These 1994 cards cut my team wantlist down to 3. 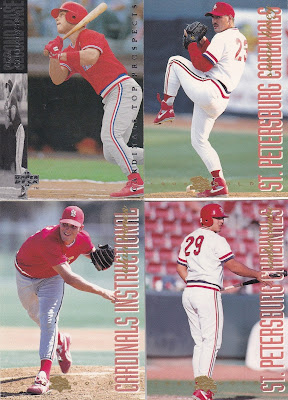 These are my first cards from the 1994 Upper Deck Minor League and Classic Best sets.  Alan Benes was the only one of the 4 who reached the majors. 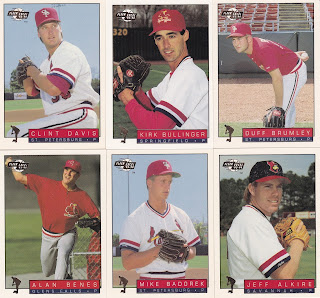 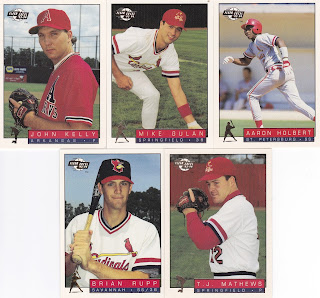 More minor league cards from 1994, these from Fleer Excel.  I was shocked to see the team set has 22 cards.  Not many big leaguers from the bunch other than Benes and TJ Mathews.  Mathews was a reliever who is better know for being part of the Mark McGwire trade. 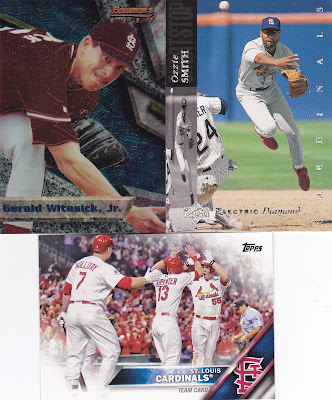 1994 Bowman Best was a strange set.  Some cards had a blue background, some had red.  Nice to get an Ozzie insert from 1994 Upper Deck.  I did not feel like scanning the 2016 Topps card by itself.  I am still 4 or 5 cards short of completing that set.  Hope to get that done before Update comes out. 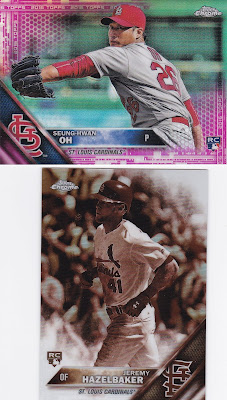 Not all cards I needed where from 1994.  Along with the 2016 Topps base card, I received these 2 Topps Chrome parallels.  I was not too excited about the Oh signing last winter, but he has turned out to be a very good reliever.  He took the closer's job around the all star break and has not slowed down.  I hope Matheny does not overuse him so he will be efffective next year.  Hazelbaker was a career minor leaguer before getting a shot this year.  He provides speed and power off the bench, but his strikeout rate will keep him from an everyday job.

I am sure most collectors are aware of the Topps Now program where you can buy a card featuring a so called notable event from the previous day.  Collectors can also buy wall art that looks like various cards or complete sets.  A new twist this year is the Topps Chrome Sapphire Set.  For the low price of $1500, you get 700 base cards along with 2 1/1s and a handful of other numbered cards.  Topps produced 250 sets, but it will be interesting to see how many of them are sold.  I am guessing quite a few will be left over and be part of a Black Friday sale.

Singles have been popping up on EBAY for a while now.  Last week I ran across a seller who listed all 21 Cardinal cards in the set with $3.50 flat rate shipping no matter how many auctions you won.  I sat at my computer Friday night and placed bids on some of the cheaper cards.  I won a total of 14 auctions. 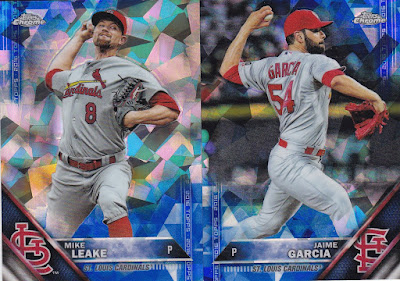 Leake and Garcia started out as 2/5 of the Cardinals starting rotation this year.  Garcia has been sent to the bullpen after a number of bad starts, while Leake is still hanging on.  If the Cardinals sneak into the playoff, it will be interesting to see if he would be the 4th starter or if Luke Weaver would get the nod. 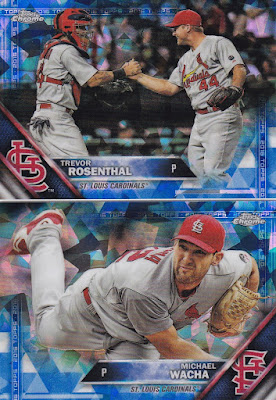 Both Rosenthal and Wacha have returned from the DL in the last few weeks to hopefully provide more reliable bullpen arms.  That remains to be seen. 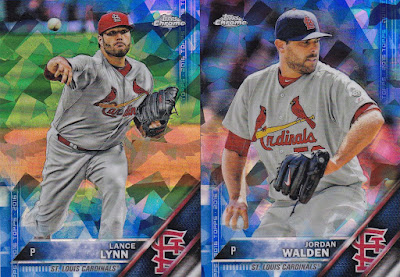 Lynn and Walden have missed the entire season with injures.  Lynn had Tommy John surgery, while Walden has not recovered from a mysterious should injury from 2015.  He is the last remaining piece of the Jason Heyward-Shelby Miller trade.  That one did not work out well for either team, although at least the Braves dumped Miller for a nice handful of prospects. 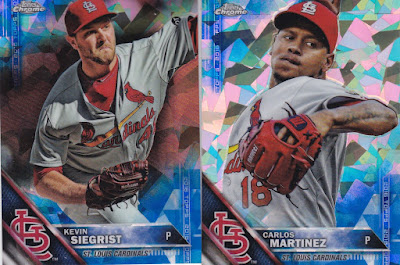 Yet 2 more pitchers from the lot.  Martinez has become the most effective starter this year, while Siegrist is good at times, but suffers from fatigue and dead arm at times.  Matheny needs to scale back his use of Siegrist if he plans to have him around for many years. 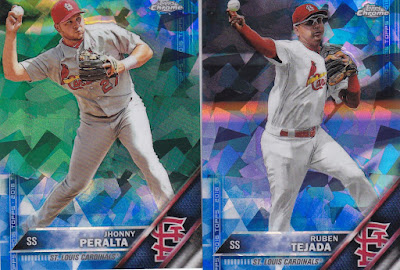 The Cardinals signed Tejada in lat spring training once Peralta was placed on the DL with a thumb injury.  He never did hit and was released before the All Star break.  Jhonny has since returned, but it a shell of his former self and has been moved to third base. 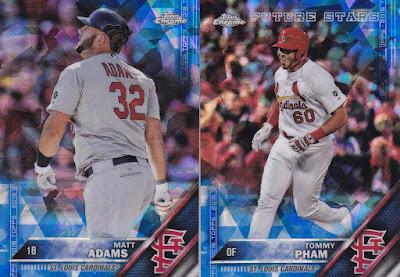 Adams and Pham both have lots of potential, but cannot seem to stay healthy.  Pham hurt his oblique during his first at bat of the season and never got regular at bats to get in a groove.  Adams hurt his shoulder and lost playing time when Brandon Moss when on a home run binge, but is starting to see more playing time.  I would love to see how well he does with 500 at bats in a season. 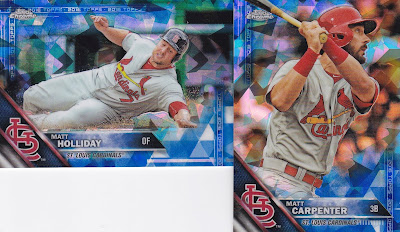 Finally 2 Matts that make up the core of the team.  Holliday is showing his age, but still had good power numbers until a Cubs pitcher broke a bone in his hand.  It would not break my heart to see some retaliation this weekend against someone like Rizzo who hangs over the plate.  Carpenter has should see another 20 home run season while batting lead off most of the season.  He has also spent some time on the DL.

11 of the cards I won for the $0.75 starting bid, while the Pham was $1.06 and Carpenter and Martinez were $1.56.  Total including shipping was $15.93.  I will try buy the last 7 cards to complete the team set, but with Molina, Picostty, and Wainwright left it will be more costly.  I will say the cards are beautiful in hand, but wish they were numbered.
Posted by CardinalsFan16 at 9:47 AM No comments:

A So Sa Kinda Mailday

No the title is not a typo, just a bad play on words.  Keeping up with my kids' after school activities has limited my hobby time the last few weeks, but I did manage to win an EBAY auction for a Cardinals auto that I have been watching for about a year now. 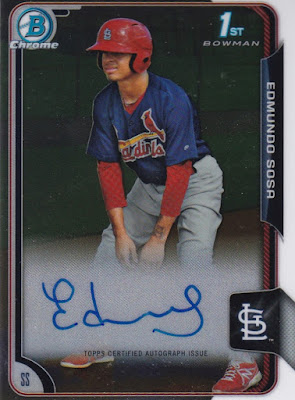 Sosa is the Cardinals 7th ranked prospect.  He spent the first half of the year in low A Peoria where he was a mid season all star.  In late July he was promoted to Palm Beach  where he only played 9 games before ending the year on the DL.  Sosa has a good chance of staying at shortstop unless he fills out more as he gets older (he just turned 20 in March). 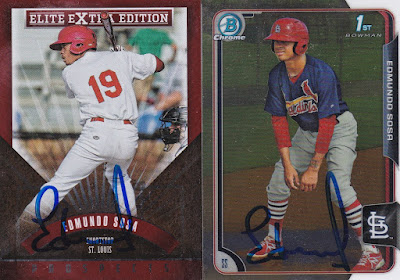 Sosa autographed these 2 cards for me at a Peoria Chiefs game in early July.  His IP auto is very similar to his certified auto.  I would guess he is 2-3 years away from pushing for a job in the Majors unless he develops more power and shifts to third base.
Posted by CardinalsFan16 at 11:14 AM No comments:

Overjoyed, But Yet a Little Sad

If you are like me, sometime over the course of your day you browse EBAY for cards of your favorite team or player.  My first search is always Ray Lankford.  I have used the saved search before, but have gotten tired of seeing the same cards over and over.  Now I just search newly listed auctions, but even that has gotten a little more tedious since COMC started listing cards.  I would guess there is an average of 20-30 new Lankford items listed per day if you include searches with his name in the descpription.


Last week I was lucky enough to come across a Lankford card I needed shortly after it had been listed with a Best Offer feature.  After a little back and forth, the seller came down about 20% from his asking price.  The card arrive a few days ago. 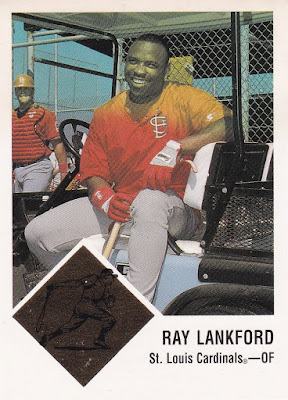 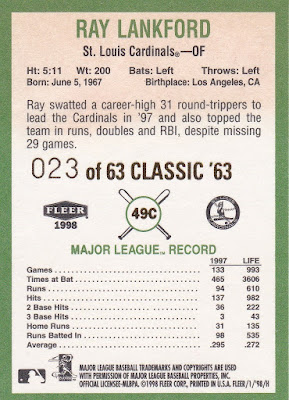 This is only the second new Lankford card I have gotten this year, so of course I was thrilled to get it.  You may noticed the top half of the front of the card shows some slight discoloration.  I did notice this in the auction listing, but was hoping it was just a bad scan or a lighting issue.  I should have asked the seller for better pictures because once the card arrived, the back showed a different story.  It almost appears like a coffee or tea stain is on the card.  I most likely would have still purchased the card, but might have asked for a larger discount.  This one did end about $15 cheaper than the last one that appeared about 3 years ago.  Since the card is 18 years old and numbered to 63, I will just be happy to mark it off my wantlist.