With the busy happenings of last week, some common household chores/jobs got overlooked.  Nothing major, although it did seem the laundry got piled up for a few weeks.  One thing I usually do is check the mailbox.  I failed to do so on Wednesday because of a work party, but my daughter took care of me.  I also have a habit of checking the front porch for any packages, but failed to tell her to do so.

Friday morning I was out putting up Christmas lights when I noticed this on the porch: 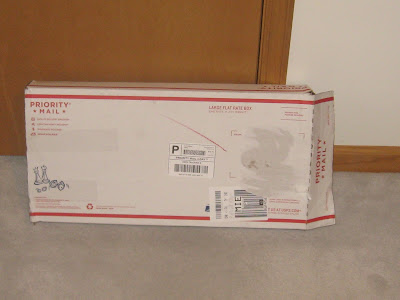 I do not remember ordering anything or making a trade of this size, so I was surprised.  The return address revealed the sender as Brady from St. Louis Cardinals Cardboard .  Brady and I have traded a handful of times since I started blogging about 2 years ago, but never anything of this stature. 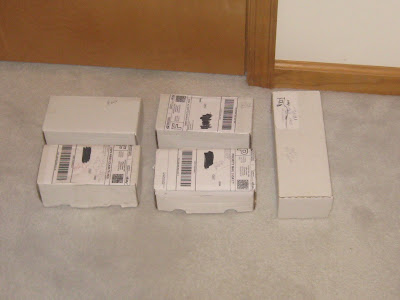 Once the box was opened out popped these 5 boxes. 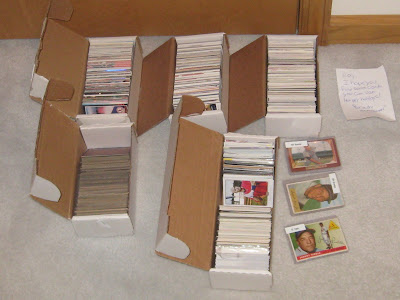 All five boxes full of Cardinals dating from 1950s to present with a great mixture of inserts and base cards. 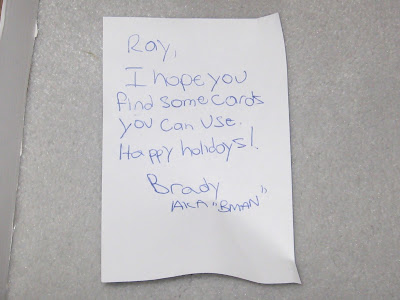 Also included was a simple but thoughtful note.  Over the last few days I have started to sort things out and hope to post soon about the highlights.  I can honestly say I was overwhelmed with Brady's kindness.  It will be fun knocking of cards on my wantlist and making some new ones.  Thanks Brady, hope to send something your way before the end of the month.
Posted by CardinalsFan16 at 12:40 PM 2 comments:

I hope everyone had a great Thanksgiving.  My house was busy the entire week with 4 extra people in the house.  We also had 22 people over for Thursday dinner.  Fun times, but exhausting.  One sour note was the lack of internet connection after Wednesday evening.  It seems everytime we get a decent rain, my connection goes out.  As of this morning, I am still without service.  With a forecast of 1-2 inches today, I doubt my service will return anytime soon.

I put off posting anything until I came back to work today.  I received a nice trade package from a member of The Bench over the weekend.  Although the rain is not a welcome site, I was glad to see snow. 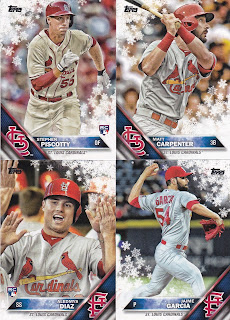 I needed all these 2016 Holiday Cardinals except the Diaz (Brady or Kerry?)  I believe I still need 3 or 4 to finish the set.  Maybe they will come before the first actual snow.

Cloudy With a Chance of Snow

I believe everyone has expressed their like or dislike for the 2016 Topps cloud design many times since Series 1 was released back in February.  Some like the escape from borders, while others think it is a white hot mess.  I was happy to see Topps try to change things up, but was not overly thrilled with the clouds.  The base cards do look somewhat better in the Chrome version.

Maybe Topps was listening to all the complaints when they decided to produce the Wal-Mart Holliday set, or maybe they just wanted to make another version of the same card that team/set/player collectors will buy.  I am guessing the later, but could not resist the temptation last night when I saw the boxes.  I have not bought a blaster all year, so it was not that hard of a decision.  $20 for 10 packs with a guaranteed auto or relic is not a bad deal. 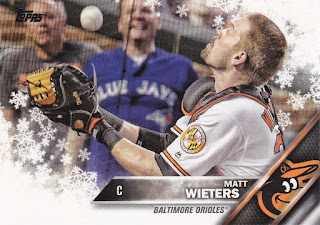 Snow flakes have replaced the clouds.  I guess it is better than the clouds.  I think blue flakes would stand out more.  At the very least it might put you in the holiday mood.  I do believe this is the real Matt Wieters.  Topps goofed up and put someone else on his Update All Star card.  No wonder he did not have a deal with Topps for years. 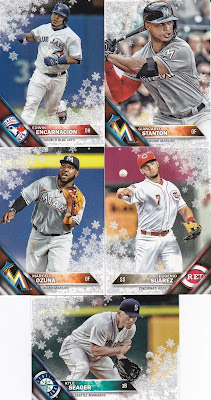 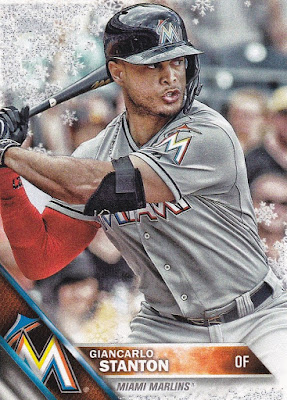 A closer look of the Metallic parallel shows the flakes better.  They have a texture feel to them, similar to glitter. 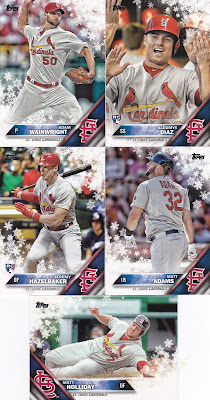 I pulled 5 Cardinals from my 10 packs, including my first Aledmys Diaz card.  There are 13 Cardinals in the 200 base card set. 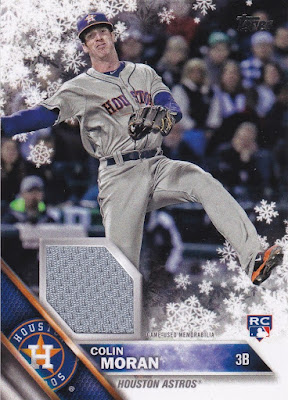 My relic left something to be desired.  Nothing against Moran, but I would guess this in one of the 5 to 10 worst players I could have pulled.  Maybe an Astro fan will read this and have a good home for it.
Posted by CardinalsFan16 at 10:44 AM 1 comment:

The Cardinals have had some memorable first baseman in my lifetime.  Most people do not remember Keith Hernandez came up as a Cardinal.  He was Co-MVP in 1797 with Willie Stargell and was also a member of the 1982 World Championship team.  Jack Clark was the only power threat for the Cardinals that reached the World Series in 1985 and 1987, but lost each time.  The 1997 trading deadline saw Mark McGwire head east to St. Louis for 4 seasons.  Big Mac kept the spot warm until Albert Pujols showed up.  Although he did not play first base his entire first season, he would be the main stay there until he left after winning the 2011 World Series.


You may have noticed I left out the late 1980s and early 1990s.  Those Cardinal teams did not have many star players and often finished third or worse in the division.  Household names like Jim Lindeman, Bob Horner, and Gerald Perry played first for some of those years.  Gregg Jefferies did make 2 All Star teams for the Cardinals in 1993 and 1994 while playing first, but left as a free agent after 2 seasons.  One big name player who came to St. Louis but did not pan out was Andres Galarraga. 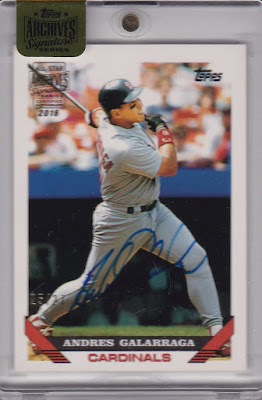 He signed as a free agent in 1992, but would only play 95 games that year because of a broken wrist.  He hit less than .250 with 10 home runs.  After 1992, he went to the Rockies and became a member of the Blake Street Bombers.  He averaged 35 home runs per year for the 5 seasons he spent in Colorado.  I guess he like the thin air of Colorado more than the hot and humid summers in St. Louis.

This 2016 Topps Archives Signature autograph is one of the few of the Big Cat in a Cardinals uniform.  The auto is not signed in the best place, but I cannot complain about spending less than $10 for an auto numbered to 27.  I am not a fan of the holder, but hate to break the seal just to put the card in a top loader.  I imagine time will change my mind.
Posted by CardinalsFan16 at 1:33 PM 4 comments:

I have mentioned before, but some of my favorite trades are with other Cardinals fans.  I thin out my doubles box in exchange for Cardinals I need, or sometimes I score cards not even on my wantlist.  A package arrived last week from Trading Bases member Mark that contained some of both.

I am way behind on my 2016 team sets this year.  These are my first 2016 Topps Archives.  Maybe I will be able to hit up some Black Friday sales to put a dent into this set. 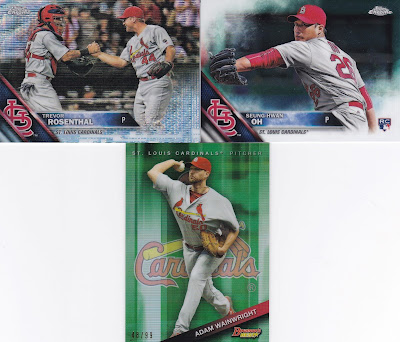 2016 Topps Chrome is another set I have a long way to go before I finish.  The Oh card is a nice addition to my base set.  The Rosenthal is a Black Wave Refractor #ed to 75.  The 2016 Bowman's Best Wainwright is a Green Refractor #ed to 99.  Almost looks like a Christmas themed card with all the red and green. 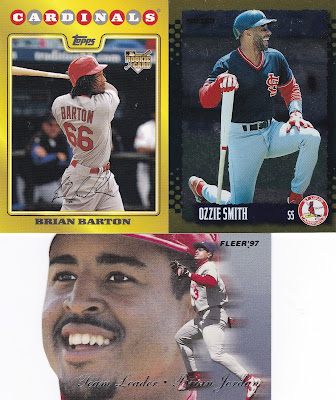 I had never seen this Brian Barton card before.  After a little research on baseballcardpedia.com I found out it is a 2008 Topps Kmart card inserted into Update packs.  Score's answer to Topps Gold cards were Gold Rush inserts.  The 1995 Ozzie did not scan very well, but looks much sharper in person.  Brian Jordan played along side Ray Lankford for 7 years in the Cardinals outfield during the 1990s.  He was a member of some bad teams before the 1996 season when the Cardinals fell 1 game shy of reaching the World Series.  I always like the die cut inserts regardless of brand. 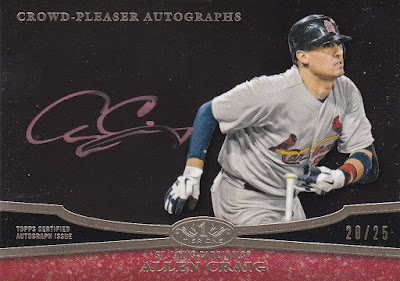 The big surprise of the package was this 2013 Topps Tier One Allen Craig auto #ed to 25.  While this is not my first Craig auto, it is by far the coolest.  Craig was a key member of the 2011 World Series team, but was never the same after a series of injuries during the 2013 season.  He was traded to the Red Sox at the 2014 trade deadline and has bounced between the Sox and Triple A since then.
Posted by CardinalsFan16 at 1:05 PM No comments:

With the start of the baseball offseason yesterday, there has been a flurry of moves by teams.  The Cardinals made some news by extending manger Mike Matheny's contract for 3 more years.  Although Mike has trouble managing a bullpen, I am ok with this move as he seems to be respected by the players.  The Cardinals also picked up Jaime Garcia's option for 2017 for $12 million.  I am guessing he will be traded sometime over the winter, but would not be shocked to see him still with the team in spring training. 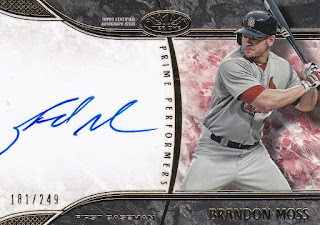 Though it was not formally announced, an ESPN report mentioned the Cardinals will not give Brandon Moss a qualifying offer.  I admit I was never a fan of Moss.  I did not like the 2015 deadline trade that sent Rob Kaminsky to Cleveland in exchange for Moss.  Kaminsky should be a very serviceable lefty in a year or two.  I also did not like resigning Moss over the winter.  Yes he hit a ton of home runs, but he hit below .250 while striking out a ton and taking away playing time from Matt Adams.  On the positive side, he managed to stay healthy and was a positive influence in the clubhouse.

I bought this 2016 Topps Tier One on EBAY for $5.99.  I think the $4 shipping scared a few people away, but I always factor that into my bid price.  It arrived earlier this week in a plain white envelope.  I messaged the seller about the high cost.  He replied back that $3 of that was a handling fee.  I hope he enjoyed the negative feedback I left.
Posted by CardinalsFan16 at 12:50 PM 2 comments: