Cards from all the way to the backstop

It seems like forever since I have been able to complete a trade with a fellow blogger.  It seems we all get busier as the weather gets warmer.  Over the weekend I received a nice package from Marcus who writes all the way to the backstop .  I sent him a handful of Tony Gwynn cards in exchange for a variety of Cardinals. 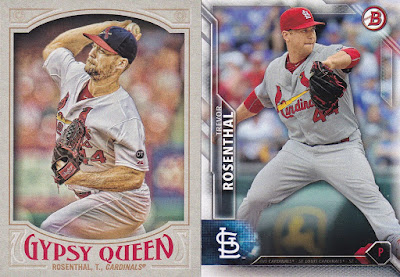 These are my first cards from 2016 Gypsy Queen and Bowman, both featuring closer Trevor Rosenthal.  Rosy was lights out last year, but has had a slow start this year.  A lot of the Cardinals wins have been in non save situations.  I think the lack of work may not be keeping Rosenthal sharp. 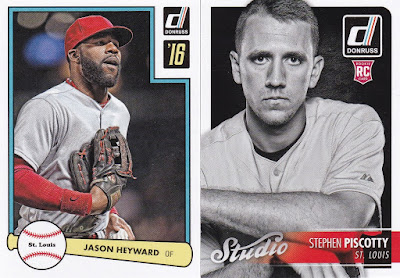 The 2 inserts from 2016 feature the Cardinals starting right fielders from last year and this year.  As of now, it looks like the Cardinals have lost nothing production wise by going with Piscotty.  I was never a big fan of the Heyward trade knowing he could be a free agent after 1 year in St. Louis.  It would have been nice to keep him, but not at the price he got paid. 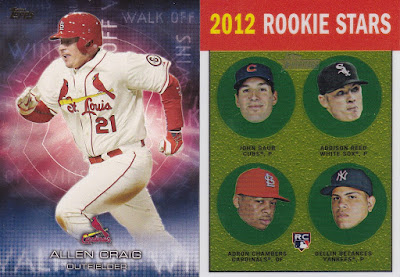 Last I checked Allen Craig has played less than 10 games this season in the minors due to injuries.  It seems he will never fully recover from crashing into a wall in Houston.  Adron Chambers had a small bench role late in the 2011 season, but has since bounced around.  In November he was suspended for 50 games for PED use.

A trio of 2014 Bowman Hometown cards featuring 3 Cardinals from Texas.  Wacha and Miller have both fallen of greatly from their All Star seasons last year, while Carpenter has maintained his steady play.

Thanks for the great cards Marcus.  Always nice to trade with a new partner from the blog world.
Posted by CardinalsFan16 at 11:39 AM 3 comments:

Dancing and Dimes in Indianapolis

I have mentioned in previous posts that my daughter is a member of a competition dance studio.  We travel to 4 or 5 competitions throughout Illinois, Indiana, and Missouri from early January to mid June.  I usually try to coordinate these trips with a ballgame or card show if possible.  Last Saturday we traveled to Lucas Oil Stadium in Indianapolis.  Obviously the Colts were not playing, but we did get a peak at the playing field.  The Triple A Indianapolis Indians were not in town either, but I did luck out and find a card show about 20 minutes away.

The show was advertised on the Beckett webpage as 40 tables with free admission.  My son and I pulled into the American Legion to find a Cub Scout ceremony going on.  I feared we made the trip for nothing, but someone informed us the card show was in the other banquet room.  The atmosphere was very laid back with very few people there.  It did not take us long to go through the tables.  Quite a few of the dealers only had football and basketball cards, which is understandable since Indy is home to the Pacers and Colts.  I did luck out and find a dealer who had 2 3000 count boxes full of dime cards that were mostly inserts or parallels.  There were some football and basketball mixed in, but at least the baseball cards were group by brands.

I managed to pull 67 cards from the 2 boxes in about 45 minutes.  I must have been one of the few baseball collectors there because the dealer was thrilled someone was buying his baseball cards.  I pulled quite a few cards for other team collectors, but I was able to score some Cardinals for my pc.  Unlike the shows I attend in the St. Louis area, the Cardinals were also a dime.

I picked these 2015 Finest cards up thinking they were the base version, but after looking closer they are black refractors. These Finest refractors are from 2014. 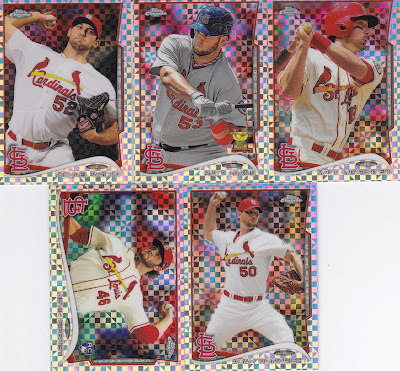 I was also able to pick up some Topps Chrome Xfractors from 2013.  Nice start to a team set.

These are my first cards from 2016 Diamond Kings, base or inserts.  There were 2 or 3 copies of the Molina, but stupid me forgot to pick up an extra for Brady.  Sorry, will remember you next time.

There were a ton of Bowman minis from various years.  I have a noted distaste for minis, but for a dime each I could not pass them up.  I love the looks of the 2 2015 Farm's Finest minis. 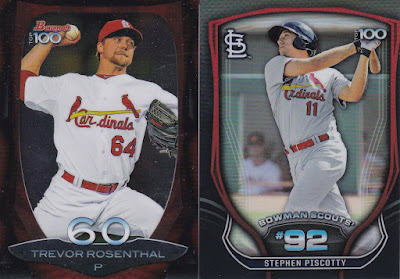 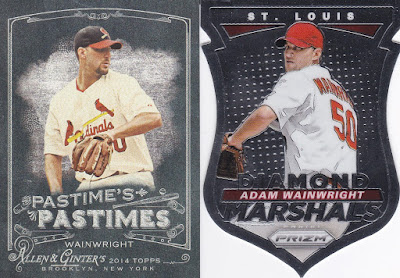 I was surprised I did not have the Wainwright Ginter card yet.  I did not have any wantlist with me, so I picked up almost all the Cardinals in the box. 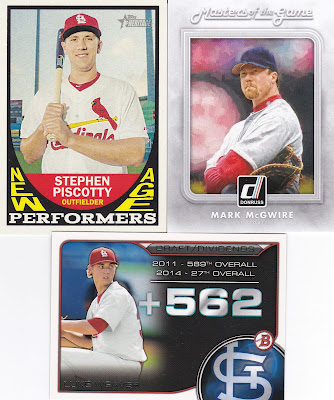 A handful of miscellaneous inserts.  The Weaver was the only card I already out of 20+ Cardinals I picked up.  I must say that dime boxes are getting to be my favorite part of going to a card show.

The Finest of Trades

Here it is May 10th already and this is my first post of the month.  Baseball and softball season are in full swing for my kids.  With 2 or 3 games a week and practice in between, a peaceful night at home has become non existent.  Add in weekend volleyball tournaments for my daughter, my spare time has been spent catching up on household chores and sleep.  I have also spent some late nights watching the Blues in the NHL playoffs.  Why the league thinks you need to start a game at 8:00 in the central time zone is beyond me.

I have managed to complete a couple of trades in the last week.  The first one arrived over the weekend from Trading Bases member Rick.  I sent a stack of Rangers his way in return for some Cardinals hits. 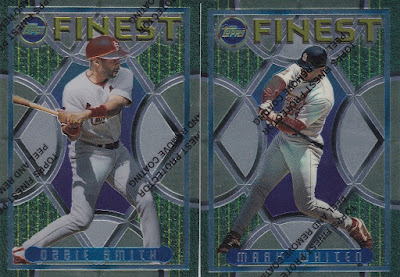 I do not think I have completed any of the Finest sets from the 1990s.  The 1995 set does not look the best with the green background and large baseball diamond. 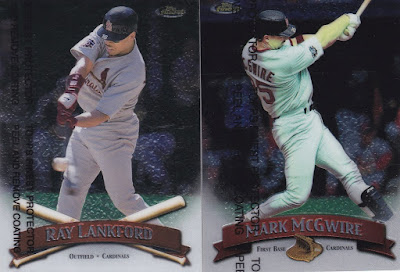 1998 Finest features full bleed photography with up close action shots.  I think the design would look better with a clear background instead of it being blurry.

There were a few other shiny cards in the package including a 1998 Topps Chrome, 1997 Donruss Elite, and 1995 Bowman's Best.

Score did not have too many sets in the early 1990s except for Select.  I like the way team colors were used for the border on the 1995 set. 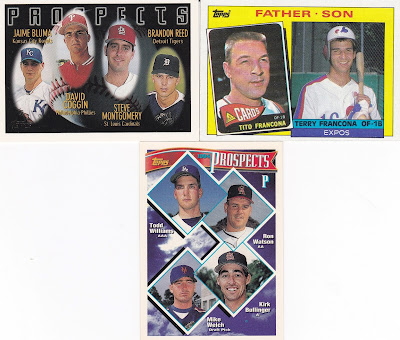 Last but not least were a some cards I need to finish up various Topps sets.  It is easy to over look multiple player cards when trying to complete a team set.  I think Topps struck out on all 8 prospects listed on these 2 cards.  I know the 2 Cardinals pitchers did not last in the Majors long.
Posted by CardinalsFan16 at 12:19 PM No comments: