Received 2 EBAY wins and a trade package over the weekend. I bought this Steven Farinaro auto off EBAY for $2.99 delivered.  I thought it was the gold refractor because it was numbered 20/50, but it is only the retail gold version.  Still a nice buy.  Farinaro was drafted in the 11th round in 2013 and is still in rookie ball.  He may not ever reach St. Louis, but it is another auto I did not have. 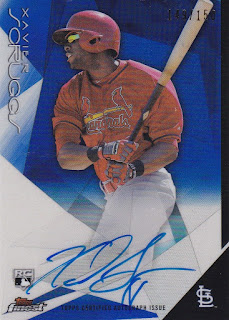 I won this 2015 Finest Blue Refractor #ed to 150 of Xavier Scruggs for $3.99.  Scruggs had a brief call up last season, but did not get much playing time.  He had a slight chance to start the season in St. Louis this year, but that did not happen once Mark Reynolds was signed.  He did get called up last weekend and had a couple of hits in his only start.  Scruggs has a lot of power, but may not have a spot with the Cardinals if Reynolds is resigned. 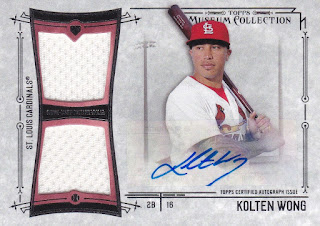 I traded a Javier Baez Tier One auto for the is Kolten Wong Museum card numbered to 299.  It is my 5th different Wong auto.  He has an outside chance of making the all star team, but I think he will be left off because 3 or 4 Cardinals will be starters.

About a month ago I got an $25 EBAY gift certficate for selling something over $20.  I sold a Matt Carpenter stadium giveaway jersey that I had two of for $25.  Having $50 to spend, I searched for a lot of game used or autographed cards from various 2015 products.  I settled for a lot of 15 Topps Tier One cards.  Two of the cards fit nicely into my Cardinals collection. 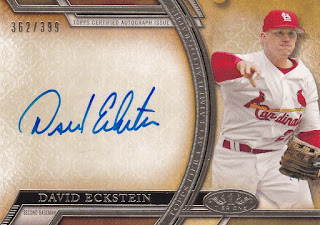 Eckstein was the MVP of the 2006 World Series for the Cardinals, although I would have given it to Scott Rolen. 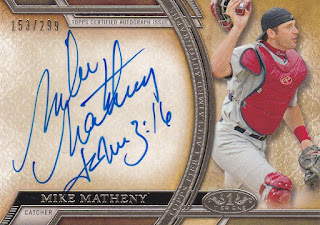 I have been watching this card on EBAY for awhile and was shocked it sold for over $20 almost every time.  It is a great looking card.

I have traded away a few cards already, but still have the following left: 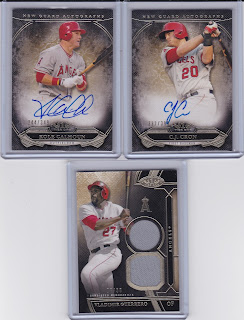 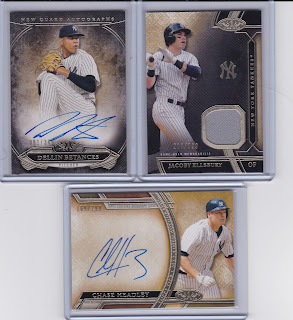 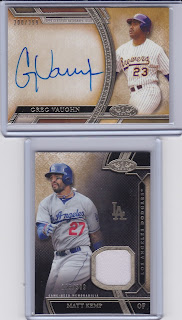 2 EBAY autos for the price of Juan

I have mentioned before how I like to collect certified autos of players in a Cardinals uniform.  This can range from the high end players like Stan Musial to the low end players like Stubby Clapp.  Today's post features 2 cards I bought on EBAY from the lower end. 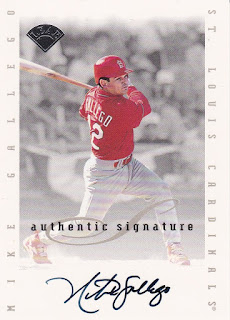 Gallego played with the Cardinals in 1996 and 1997 as a reserve infielder.  He was a productive member of the A's during the early 1990s, thus the reason why Tony LaRussa brought him to St. Louis even though he was toward the end of his career. 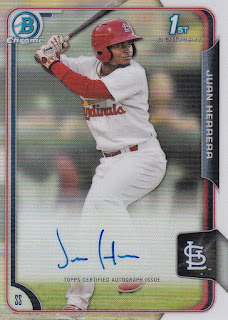 The Cardinals traded for Herrera during the 2013 season.  He was an All Star for the single A Peoria Chiefs in 2014.  He has a good glove and can run a little, but I am not sure he will ever reach the big leagues on a consistent level.  At least he looks like a big leaguer in this photoshopped card.

Posted by CardinalsFan16 at 9:11 AM No comments:

I received a nice package last week from John at Johnny's Trading Spot.  John sent a flat rate box a while back that did not quite make it to me with all the cards he sent.  In fact, there was only one card left after someone abused the box.  John went the bubble mailer route this time and all cards arrived ok. John sent a great mix of 2 of my favorite O's: old and oddball. 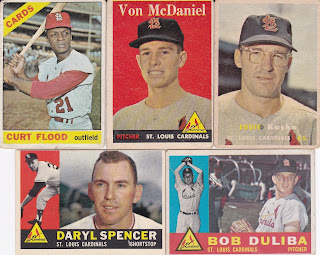 McDaniel and Kasko are my first Cardinals from the 1950s, Kasko from1957 and McDaniel from 1958.  The Spencer and Duliba are 1960 Topps.  All four of these cards are in great shape.  The 1966 Topps Curt Flood shows some wear, but is still a great card. 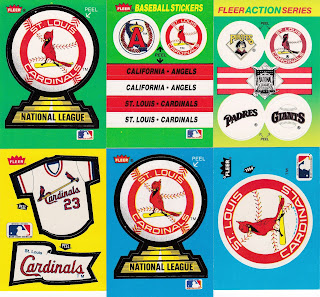 Who does not love stickers?  I remember as a kid I would stick these on my 800 count boxes or the front of an old binder. 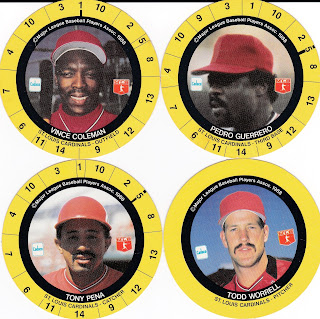 These discs are from the 1988 Cadaco game.  I still have this game in its origianl box along with all the disc.  I spent many hours playing this game with my brothers.  Coleman was my favorite player at the time and it made me mad I could never hit a home run with him.  Pretty tough to get the spinner to land on the #1 slot on his disc. 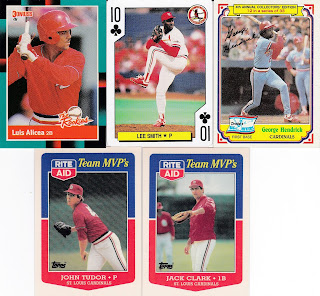 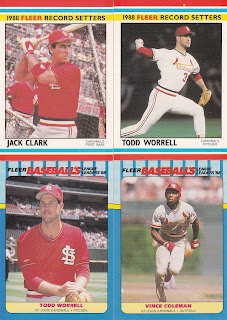 In the late 1980s,  discount and drug stores like Super X and Ben Franklin carried a lot of small box sets Fleer put out.  These are not very valuable, but some can be harder to find than others. 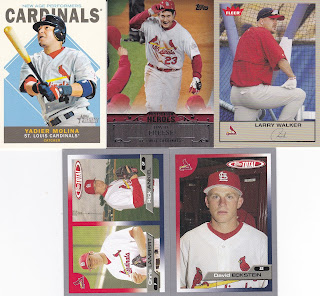 John also included some more modern inserts.  The picture of David Freese crossing the plate after hitting the game winning home run in Game 6 of the 2011 World Series never gets old.

Trading is a Habit

Last post I mentioned receiving 2 large bubble envelopes in one day.  The second was from Robert at $30 a Week Habit .  I sent him a few Blue Jays a while back and he responded with more than enough Cardinals in return. 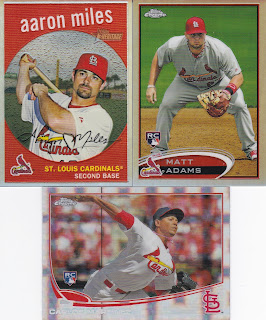 First is a nice group of Chrome cards.  The Miles is #ed to 559, the Adams a refractor, and the Martinez a Xfractor.

From the shiny to the colorful.  I love the looks of the 2014 Topps Red Sparkle cards.  The green tint are not bad either.  Wish Miller was still pitching for the Cardinals, but it is nice to see him doing well for the Braves. 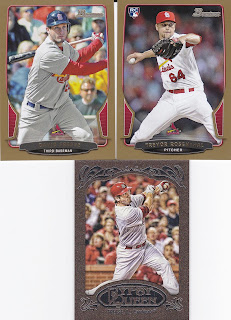 Gold is always is nice color to get.  A pair of 2011 World Series MVP David Freese cards along with a Trevor Rosenthal. 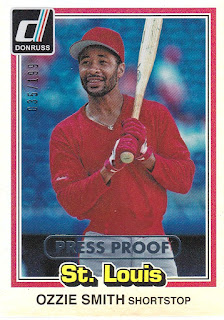 Always love Ozzie cards, even ones without logos.  This 2015 Donruss Press Proof did not scan the best, has a lot nicer glossy finish. 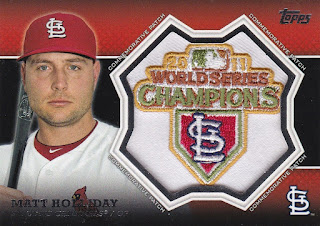 Matt Holliday had his on base streak end last night with an ejection over a called third strike.  At least he will always have a World Series ring from 2011. 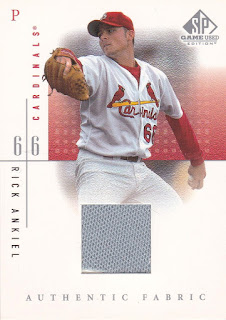 Last but not least is a 2001 SP Rick Ankiel jersey card.  Ankiel is a great story, turning from stud pitcher to outfielder.  I often think what he might have been if Larussa had not started him in Game 1 of the 2000 Division Series with a backup catcher.