Oddball Killer on the Loose in Atlanta

I am slowly getting back into the collecting world the last few weeks.  I have bought a few things off EBAY, have plans to attend a card show this weekend, and have mailed a few cards out.  Monday I received a nice bubble mailer from Tony who writes the very entertaining blog Off Hiatus Baseball Cards .  I believe this is the third time we have exchanged cards since I started blogging back in February of this year.  Tony always sends a nice assortment of Cardinals from my wantlist, ranging from the mainstream sets to the oddball cards that discount stores put out the the late 1980s.  This latest packaged contained more of the same.

These four 1986 Fleer minis completed my team set.  Vince Coleman was my first player collection.  It was a hard day for me when he signed with the Mets.  His career never seemed the same after he left St. Louis.  The 100 stolen bases per season never happened again.

Classic seemed to put out 2 or 3 sets per year in the late 1980s.  These 3 completed my 1987 Update set.  I did not scan the back, but none of these had any career stats on them.  Instead there was a short write up about the player's college or minor league career. 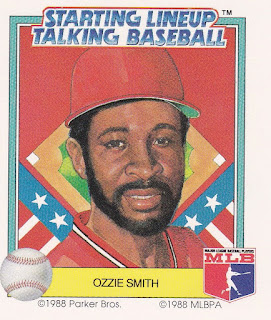 Tony sent the entire 1988 Starting Lineup Talking Baseball Cardinals set.  I just scanned the Ozzie Smith because he was the last one I needed. 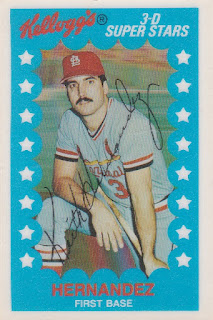 I love the 3D cards Kellogs inserted in cereal boxes.  This 1982 Hernandez is in great shape, does not have the curl a lot of the cards show.  I need Bruce Sutter to finish this set. 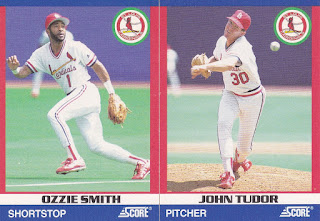 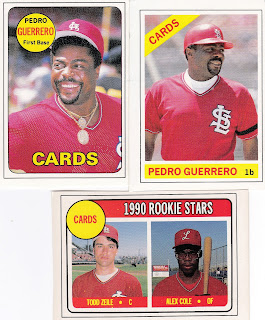 Back in the early 1990s many card magazines would include card panels in their publications.  Two of these are from 1990 Baseball Card Magazine, the other from 1991. 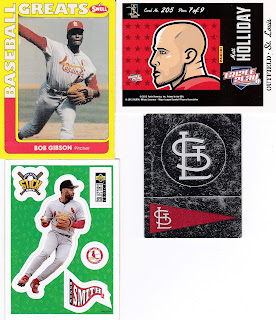 The Ozzie Smith is a sticker card from 1997 Collector's Choice.  The Cardinals logo/pennant sticker is from 1988 Panini.  Swell put out a couple of sets in 1990 and 1991.  The Gibson is from 1991.  I have never been of fan of Triple Play cards, licensed or not.  The Holliday cards is from 2012.  The back is part of a 9 card puzzle set the completes the picture on the front. 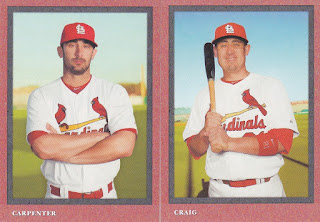 Tony also included 2 2014 Turkey Red cards.  Turkey Red was only available online that year.  These are the first Cardinals I have from this set.  There are 3 more Cardinals in this set: Molina, Wainwright, and Miller.


Once again a great group of Cardinals.  Tony's Brewers played the Cardinals tough this last weekend.  Scoring 7 runs in the ninth to win Sunday's game hurt a lot.  At least they also beat up the Pirates this year, winning 10 of 19 games including a 7 game winning streak.  Thanks Tony!

It has been a while since I added a certified auto to my Cardinals collection.  I surf EBAY ever day or two for Cardinals from the last couple of years.  I have searched for a 2014 Topps High Tek Ron Gant auto for over a year now.  Gant was a decent outfielder for a few years in the late 1990s for the Cardinals, but I did not want to pay $8-10 for his auto.  Last week I was able to win an auction for 2 copies of the Gant> 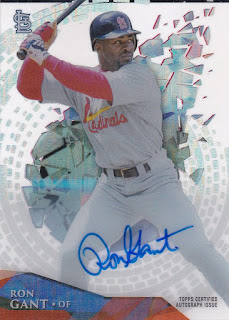 This is the base version.  Total cost including shipping was $4.50.  I guess it pays to wait sometimes.
Posted by CardinalsFan16 at 11:06 AM 1 comment:

Delivery from the Card Shop

My blogging and collecting/trading activity has been low for over a month now.  Long work hours and running children to after school sports/dance/choir etc has cut out my free time.  I was able to make a trade with Daniel from It's like having my own Card Shop last week.  I sent a handful of Diamondbacks his way in return for a nice lot of Cardinals. 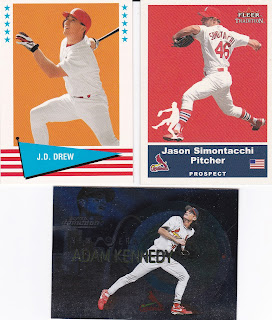 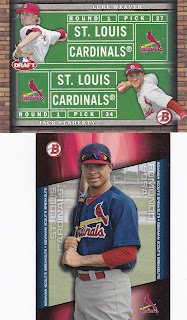 Some people may not like receiving cards of minor league players, but I use them for autos at games.  I have one copy of the Flaherty/Weaver card that is signed by Flaherty.  This one will go in my non auto collection.  Edmundo Sosa has a good chance of moving up to Peoria next year, so this card may be signed next time you see it on the blog. 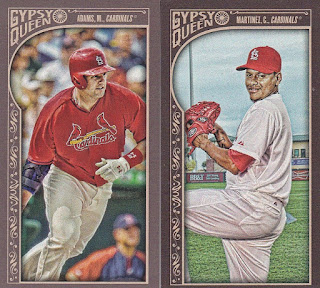 Here are a couple of mini inserts from 2015 GQ.  Adams just recently return from a torn quad, but has yet to see much action.  Hope he can return to form for the playoffs.  The Cardinals need all the help they can get scoring runs. 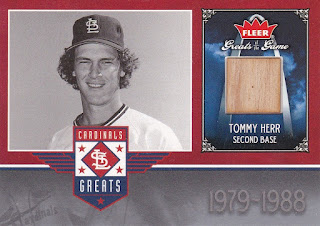 Last but not least is a Tommy Herr bat card from 2006 Fleer Greats.  This set had some great inserts like the Nickname auto cards.  I love the use of The Arch in the background of the bat piece.

Great batch of cards from Daniel, who threw in more cards than he had too.  Thanks!

They are Shiny, Pink, and Blue

Well it has been almost a month in between posts.  Work has been very crazy for almost a month.  45-50 hour work weeks have become common.  School also started a few weeks ago, which means after school activities to shuttle the kids to and from.  I had to pick up my daughter from dance class  today.  Finding myself with some time to kill, I ventured to Wal-Mart to check out the card isle.  I cannot recall buying any packs since early April when Gypsy Queen came out.  Today was also payday, so of course I had some cash that was begging to be spent.  A hanger box of 2015 Topps Chrome was calling my name.  $10 for 16 cards, with a guarantee of 4 pink parallel cards. 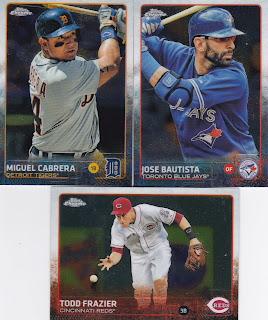 Some notable base cards.  Topps again failed to identify regular refractors on the back of cards, although I do not believe I received any.  Other base cards I pulled include Buck Farmer, Yorman Rodriguez, Jon Singleton, Yasmany Tomas, Torii Hunter, Mookie Betts, Chris Archer, and JJ Hardy. 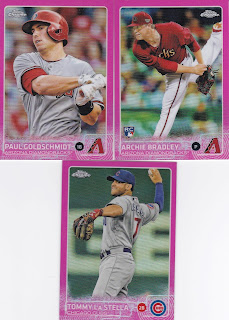 The pink cards I received had a Arizona feel to them. 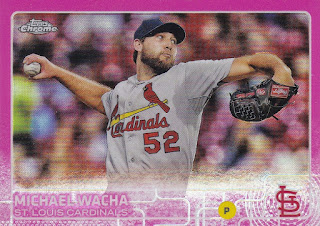 The only Cardinals I received was a pink Wacha.  I guess with only 16 cards in the pack, it was nice to even receive one. 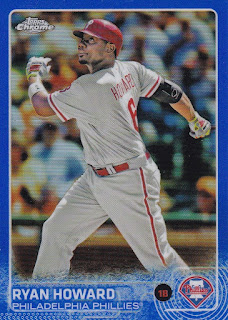 The other hit from the pack was a  Blue Refractor of Ryan Howard numbered 140/150.  It may not be worth much, but was still a nice hit with the odds being 1:64 packs.  All of the cards are for trade except for the Wacha.

Posted by CardinalsFan16 at 5:54 PM No comments: