I Got High from Opening the Mail

Monday I received one bubble mailer from a trader on the Trading Bases message board.  We worked out a trade where I sent him a Brewers auto for a 2015 Topps Chrome Refractor auto of Xavier Scruggs. 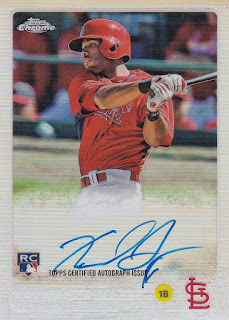 A nice shiny card numbered to 499 with a sharp blue on card autograph.  Scruggs does not have the nicest auto, but at least you can somewhat make out the first letter in his first and last name.  This was the only card I was expecting in the envelope, but out popped these also: 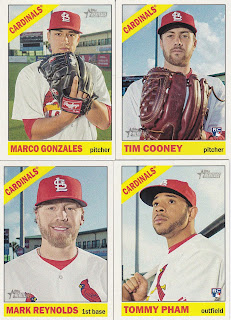 These are the only Cardinals in the 2015 Topps Heritage High Numbers set.  Although I will most likely receive all of these from Nacho's group break, it is always nice to receive something unexpected no matter how valuable it may be.
Posted by CardinalsFan16 at 2:37 PM No comments:

Last week I received this card in the mail that I won on EBAY for $3.74 delivered. 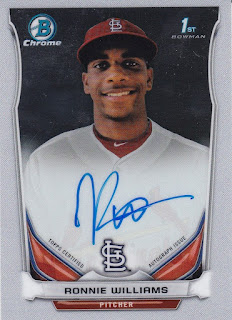 Ronnie Williams was a second round draft pick by the Cardinals in 2014.  He is very raw, but has a power arm like a lot of other Cardinals and will not turn 20 until January 2016.  If he does pan out, it will most likely be 3-4 years before he makes his MLB debut.

If you bought any Bowman Chrome cards the last few years, you know this is a 2014 Bowman Chrome Draft card.  The auction I won listed it as a 2015 card.  Other EBAY auctions listed it both ways, so I decided to do a little digging.  According to the Topps website, this card was to be included in 2014 Bowman Draft, but Williams did return the signed cards in time to make the release date.  Hard to believe it took much time to sign that auto, a simple R and W.  Rather than destroy the cards,  Topps included them in 2015 Bowman Chrome because "the cards deserved to be in the hands of collectors."  Topps also had the same situation with Mets prospect Michael Conforto.  At least Topps did not destory the cards, but I would not be surprised to see Williams and Conforto cards be used as replacements for redemptions in the future.

The playoffs are down to 4 teams now.  I cannot say I really care who wins the World Series as long as it is not the Cubs.  The NL series should be interesting with the young pitching of the Mets vs. the young hitting of the Cubs.  I was rooting for the Dodgers to beat the Mets, but Daniel Murpy had other ideas.  Last week I worked out a trade with Greg who writes the blog Plaschke, Thy Sweater is Argyle.  I guess we were destined to trade since both our teams lost in the Division Series this year.  I received my end of our trade on Wednesday, but did not open it until I was watching the game last night. 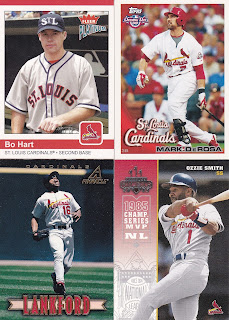 Of course I received some cards that completed a couple of team sets.  The Bo Hart and Mark DeRosa cards complete sets, while the Lankford and Ozzie cards brought both sets down to needing just 1 card. 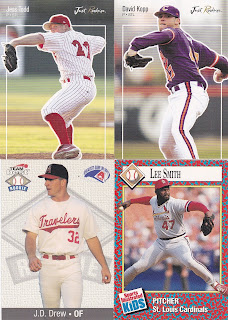 I do collect Cardinals minor league team sets also.  When I go to minor league games, I like to pick up the team set from the previous year for $5 or less.  Greg included some Just Minors cards of a couple of pitchers who never made it to the majors with the Cardinals, but JD Drew had a few nice seasons with them.  Cardinals fans remember him most for being part of the Adam Wainwright trade with the Braves.  The Lee Smith was a nice oddball card from SI for Kids. 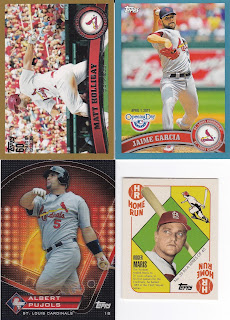 Greg included a nice 4 pack of inserts.  I always liked the Topps Gold cards, but am not as big of a fan of all the color variations that came out after that.  Blue, red, green, yellow, etc can get to be a little much.  At times I wish Ray Lankford had more modern cards, but am glad I do not collect an active player because of all these variations.  I had never seen this 2011 Topps Prime 9 Pujols card before.  Very sharp looking card.  A lot of people may not realize Roger Maris finished his career with the Cardinals in 1967 and 1968.  The Cardinals made the World Series both years, winning in 1967.  I believe this card is a 2010 Topps Red Backs. 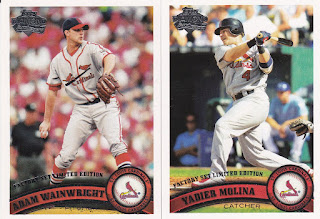 Greg all 18 Cardinals in the 2011 Factory Limited Edition set.  Only five players are still on the team: Molina, Wainwright, Holliday, Jay, and Garcia.  Great set to have. 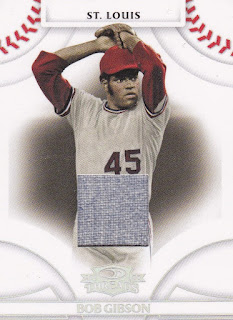 Last but not least is a 2008 Donruss Threads Bob Gibson jersey card numbered 91/100.  While the design is rather blah, it is always nice to add a Cardinals HOFer to the collection.

In my last post, I gave an overview of some things I bought from a card show.  I hit up a quarter box and found quite a few cards that I used for trade bait.  I traded a 6 card Pirates lot to a good trader on the Trading Bases message board for some 2015 Cardinals base cards.  The trader threw in some nice inserts as well. I would guess this Cardinals lot would have cost me $15 at the show. 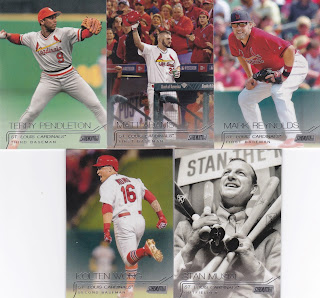 I think every trader loves the photography from 2015 Stadium Club.  Most of the photos I have seen have not been used on other cards yet.  There is also a nice selection of players ranging from current starters to HOF players.  I love the fact players like Terry Pendleton were including in this release.  While he only played in St. Louis for 6 years, he was a member of two World Series teams. 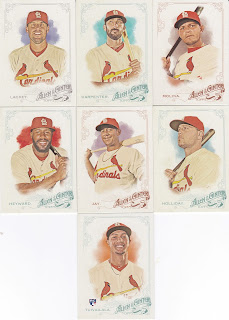 These are my first 2015 Allen & Ginter cards.  I cannot ever recall buying any packs of A&G.  I just am not into the oddball/celebrity cards.  I do like the colorful border and background on this year's design. 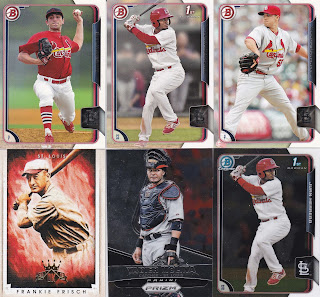 Hits to my team sets from Bowman, Diamond Kings, and Prizm.  I really hated the Brandon Moss for Rob Kaminsky trade.  Though he is not big in stature, Kaminsky is a lefthander with good control and a low 90s fastball.  Cleveland will have a solid #3 or 4 starter in a couple of years if he stays healthy.  I would be surprised if Moss is with the Cardinals next year. 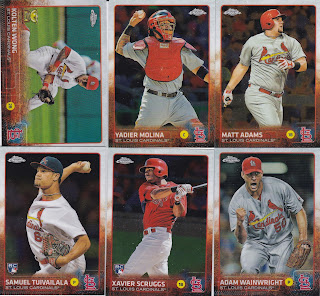 I really wish Topps Chrome would have noted which cards are refractors.  I am guessing the Wong and Wainwright are, but I would not swear to it.

I do know this Wong is a Prism refractor.  I love the looks of these in person.  I am not a fan of Topps Chipz, but will take them anyway. These things are storage nightmares.

This was a great package to open last night to raise my spirits after watch the Cardinals lose.  Guess you cannot win every year, but this one stings a little more since it is the Cubs who eliminated them.  Every dog, er cub has its day eventually.

Count Me in Too ... Weekend Card Show Report

Seems like a lot of bloggers had the chance to attend a card show this past weekend.  I drove a little over 2 hours to attend a show in St. Louis.  I normally would not drive that far for a show, but there were 2 autograph guests that were priced right so I took the plunge. 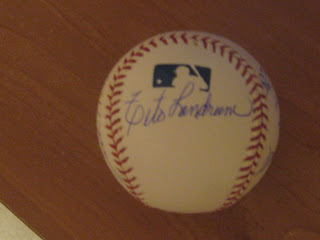 I have been working on getting a 1985 Cardinals team ball signed for about 6 years now.  When I started this project only Darrell Porter had passed away, but sadly Bob Forsch and just last month Joaquin Andujar have died.  Even though it will never be complete, it is a fun project to do.  I paid $12 to add Tito Landrum to the ball.  Tito was a reserve outfielder for most of the season, but played a lot in the playoffs due to Vince Coleman getting run over by the Busch Stadium tarp.  It is always nice to see someone take the time and write their entire name.  Tito was very nice and talked to everyone in line.  I was talking to the guy behind me who had 20 different cards to sign.  Tito overhead and said he only signed in groups of 25. 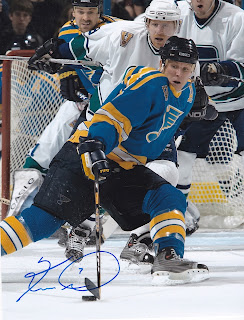 I do not collect hockey cards, but do have a few signed items.  I paid $35 for this Keith Tkachuk 8x10. Tkachuk is one of my all time favorite Blues because his tough nose style of play.  I was rather shocked to see no one in his line when I arrived about 40 minutes after he started to sign.  Tkachuk spent a good 5 minutes talking to my family.  He was rather shocked my 7 year old did not play hockey.  He was even more shocked that I drove over 2 hours for his autograph. 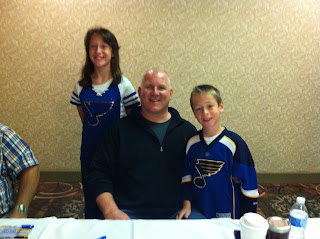 Not the greatest pic, but you can only do so much with your phone.  Not sure if you can tell or not, but Tkachuk  has been earning his " Big Walt" nickname since his playing days are over.  I would guess he has put on a good 60-70 pounds.


After getting the autos, I spent about 1.5 hours going through the card show.  I would say there was a good 50 tables there.  There was a good mix of vintage, various Cardinals memorabilia, boxes, and current singles available.  I did not buy any cards for myself.  I did not find any Lankfords I needed, and most of the Cardinals were overpriced anyway.  I do understand charging more for cards of your local team, but some of the prices were double or even triple EBAY prices.  $15 for a simple white swatch 2015 Matt Holliday jersey cards is too much in my book.  I did spend a total of $17 on trade bait.  No pictures as I like to keep things a surprise, but here is a run down of what I got:

I will be mailing out 3 packages later this week.  If you are a Pirates, Dodgers, or Braves fan be sure to watch your mailbox.  My biggest pet peave with card shows are dealers who do not separate their bargain boxes by sport.  The dealer who I purchased the $5 lot from was about the only one who did so.  There were a few other boxes I glanced at, but did not want to spend the time going through football and basketball cards.