Collections for the Collection

Card companies were cranking out products left and right in 1998.  Baseball Card Pedia lists over 50 different set produced that year.  It was nice to have a large variety to choose from, but some of the sets were redundant where the manufacturing used the same photo with a different finish to it..  Topps had Topps Chrome.  Upper Deck had Special F/X.  Not to be left out, Donruss produced its Colletions set that featured cards from its base set. Leaf, Elite, and Preferred.  Just like the other 2 companies, the new set featured the same cards with a chrome like finish.  My lastest trade package from TCDB member udelljaru brought me a handful of these cards. 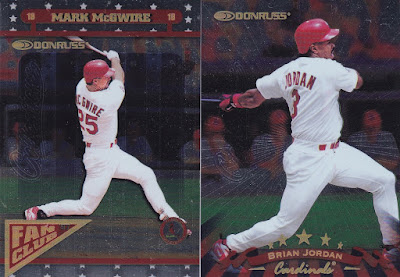 These two are from the Donruss set.  The cards scanned much darker than what they really are.  Very comparable to the Topps Chrome cards. 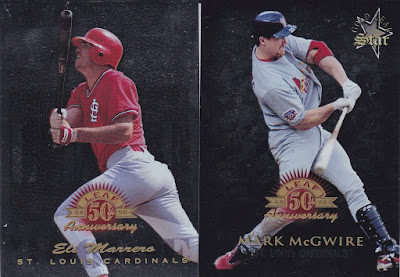 These are from the Leaf set.  The trader thought the Marrero was the rarer Prized Collection version, but it is just the regular card.  No big deal to me as I needed it anyway. 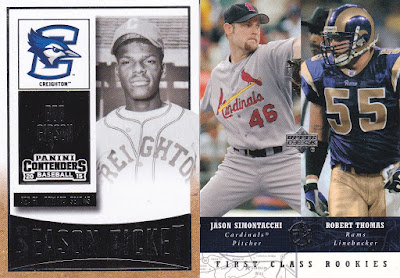 The last 2 cards are from a couple of lesser known sets.  The Gibson is from 2015 Panini Contenders set.  Gibson was diagnosed with pancreatic cancer a few months ago.  I have not heard any recent updates on his health other than he is getting treatments.  The Simontacchi is from the 2002-03 Upper Deck Superstars sets that featured players from different sports from the same city.  Not a bad idea, but the cards are rather plain.
Posted by CardinalsFan16 at 12:40 PM