It has been quiet for me on the trading front lately.  Other than Topps Series 2, none of the new releases have been very appealing to me.  Maybe with Stadium Club coming out next week, things will pick up.  I have managed to complete a handful of trades on TCDB.  A large one with member DarthPanzer arrived Monday with a huge stack of needed Cardinals. 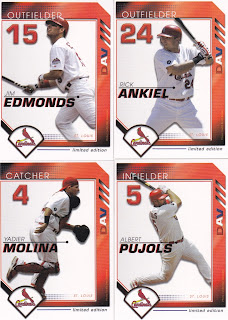 The highlight for me was a complete set of 2007 DAV cards.  The TCDB lists 35 cards in the set, but I received 42.  I will show why in the next scan, but first here are 4 of my favorites.  I like the simple design with a red border.  This set was not meant to be flashy. 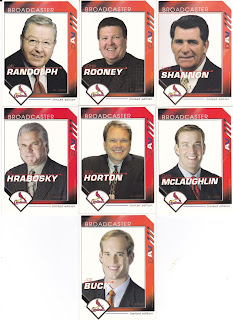 These 7 broadcaster cards were not listed in the checklist.  They show all the various guys from radio, regional TV, and national TV.  Fun addition to the Cardinals collection. 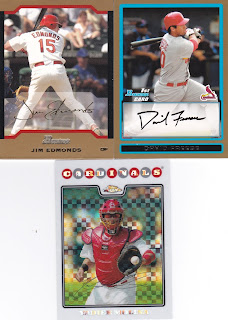 Not all cards were from the DAV set.  I scored a couple of Bowman gold cards and a sweet Yadi Xfractor from 2008 Topps Chrome. 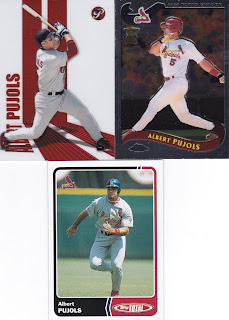 I also received some various Pujols cards for my team sets.  The 2004 Topps Pristine is a great looking card. 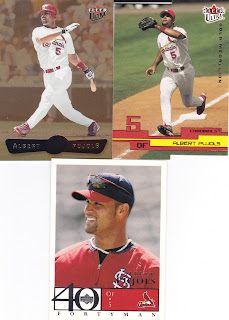 2 Ultra Gold Medallion cards and a 2003 Upper Deck 40 Man base card finish the package.  It is nice to see Pujols having some success with the Dodgers after being released by the Angels.  Maybe he can win a third ring if the Dodgers pitching holds up.