Back to the TCDB

As my previous couple of posts have mentioned, I have not had much opportunity to work out trades the last few weeks.  Now that my son's baseball season is over, I hope to get back in the swing of things.  You know things have been slow when it has been almost 2 weeks since I recapped a TCDB trade.  My latest one arrived earlier this week from member alh.  He sent a huge stack of mostly 1980s Cardinals. 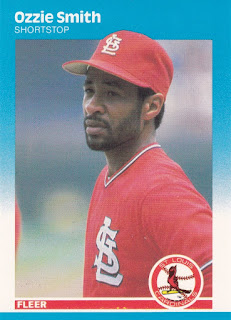 This may look like a regular 1987 Fleer card, but it is actually the last Glossy version I need to complete my team set.  It is nice to put the 25 card team set to bed.  It always seems like I need an Ozzie card to finish a team set from that time period. 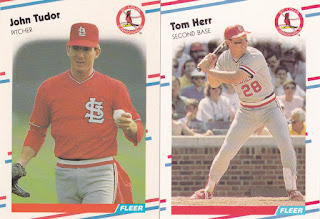 I also received 16 different 1988 Fleer Glossy cards.  This team set has 28 cards, of which I still need 2.  Surprisingly they are Lance Johnson and a Tony Gwynn/Vince Coleman card.  You may wonder why I only scanned the Tudor and Herr cards.  Both of them are being inducted into the Cardinals Hall of Fame in August.  I have mentioned it a ton of times before, but I loved the Whitey Herzog teams of the mid 1980s.  These 2 were key parts of 2 World Series teams in 1985 and 1987. 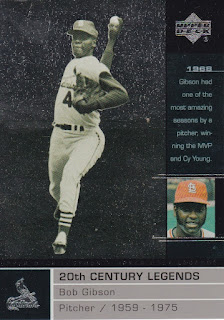 Another team set hit was this short print from 2000 Upper Deck Legends.  Still need the McGwire and Musial sps to finish this one. 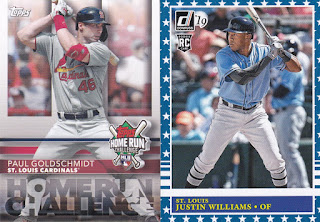 The insert portion of the trade included a 2020 Topps HR Challenge card and a 2019 Donruss Independence Day parallel.  I have 4 Goldschmidt codes to enter before 2021 ends.  I missed his hot streak a few weeks ago. 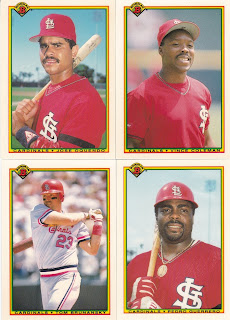 The last 4 cards were extras from the 1990 Bowman Tiffany set.  I really appreciate when others throw in a few extra cards, even if they are not the most valuable.  I only have a handful of Cardinals from this set, but I have now added the missing ones to my wantlist.