I can see the light at the end of the tunnel with my trade recaps.  After today, I have 2 more stacks on my desk to scan.  I do have more trades coming in and a few EBAY lots, but it feels good to almost be caught up.  Today's recap features 2 pwe envelopes that had 3 cards each.

First up is a trade from TCDB member propmaker. 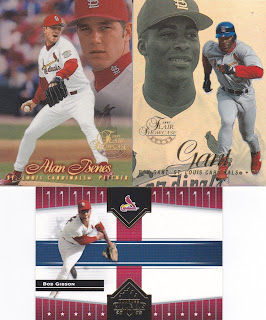 It has been some time since I received any Flair Showcase cards in a trade.  I always think of Flair as Fleer's version of Stadium Club.  The photography is not quite as good, but the premium stock is excellent.  Both of these are from 1997.  The Benes is a Row 1, the Gant is a Row 2.  The Gibson card is from 2005 Donruss Champions.  It is a large team set with 19 Cardinals, but you wonder why guys like Abraham Nunez and Roger Cedeno are included in a set that features champions.
Next up is an unexpected pwe from long time friend Mark Z.  I have lost track how many times we have sent each other our Cardinal duplicates over the years.  I believe we started back in 2012 shortly after we met at a Memphis Redbirds game.

Any Pujols or Molina inserts are always welcome, even the mini type.  Brian Barton is more famous for his degree in aerospace engineering than his baseball career.  He played in 82 games during the 2008 season, then only appeared in 1 other big league game.  That is still 83 more games than I have appeared in.
Posted by CardinalsFan16 at 12:49 PM