One of my biggest recent trades came from TCDB member mac412.  I sent 34 assorted Pirates to him in exchange for 17 Cardinals.  Once again an addition by subtraction trade where I get half as many cards as I sent out.  What was even better is that I only received 2 base cards.  Everything else was either an oddball or insert. 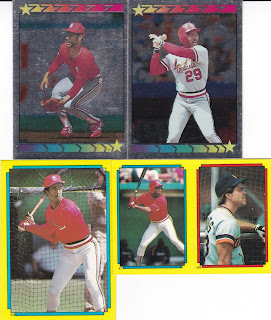 These 1988 Topps Stickers have a ton of variations due to the different backs.  If I ever get around to filing these away, I will have to show off them off.  Until now, it is just the fronts.  I did not have either of the top 2 stickers. 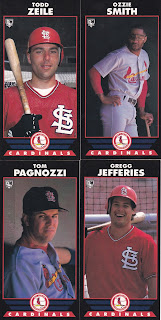 Before this trade, I did not have any Cardinals bookmarks.  Now I have all 4 from the 1993 Diamond Marks Bookmarkers set.  These cards are similar in size to 1994 Fleer Extra Bases, measuring 2.5 inches by 5 inches. 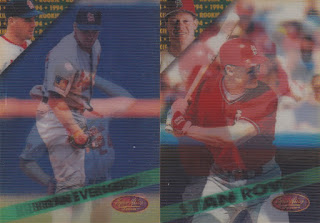 It is really hard to get a decent scan of a Sportflics card.   These 2 are from the 1994 Traded set. 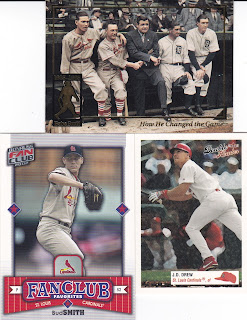 The top card is from the 1995 Megacards Babe Ruth set.  This 25 card set highlights different moments throughout his life.  Cardinal greats Dizzy Dean and Frankie Frisch are pictured with Ruth during the 1934 World Series.  The bottom 2 base cards are a short print from 2002 Donruss Fan Club and 2003 Fleer Double Header.  The Drew completed my team set. 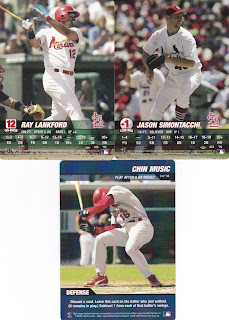 I almost had to chuckle when I saw this group of 2004 MLB Showdown cards.  The Reggie Sanders card at the bottom is priceless.  I had a copy of the Lankford card for my player collection, but needed this one for the team set.  Lankford wore #16 during his first 12 years with the Cardinals but switched to #12 in 2004 because Sanders had it. 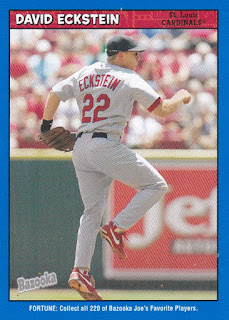 The lone insert from the lot was this 2006 Bazooka Blue Fortune Eckstein.  This reminds me of the Big League Blue parallels.  2021 Big League is set to release next Wednesday, but I have heard very little about it.  I am hoping it does not double in price like the rest of the 2021 releases.