Staying With the Trend

For the third day in a row, I will highlight a couple of trades from TCDB members.  This has been a good way for me to stay close to current on my recaps.  If only it was as easy to file the cards away.  I hope to have some spare time this weekend to work on my card stacks as I must have 200+ cards that need to be put away.  On to the recap.

First up is a 3 pack from member 49ants. 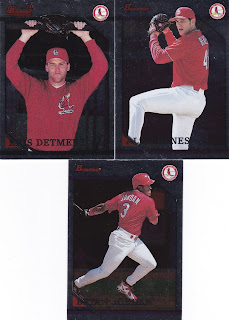 These 1996 Bowman Foil cards did not scan the greatest.  I have been slowly adding the Bowman parallels from the 1990s sets to my wantlist.  I like the hometown/international parallels a little more than the foil ones, but any are welcome additions.

The second trade was also 3 cards.  This one was from member alanskontra. 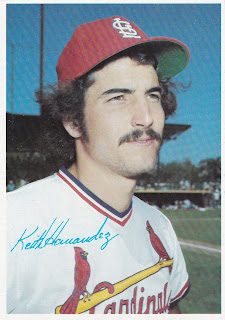 This is my first 1980 Topps Superstar Photo.  These are huge, measuring almost 5"x7".  There are two different variations to track down, one with a gray back and one with a white back.  This is a gray back.  Hernandez was elected into the Cardinals Hall of Fame yesterday.  It is easy to forget he played 10 years in St. Louis.  I always remember him as a Met first, but he was a very good player as a Cardinal.  He won 6 gold gloves, made 2 All Star teams, shared the 1979 MVP award with Willie Stargel, and won a World Series in 1982. 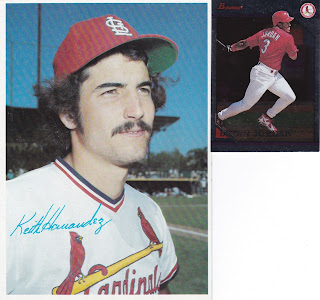 Just to give you an idea of the size difference.
The last 2 cards are a pair of shortstops who were traded for each other. 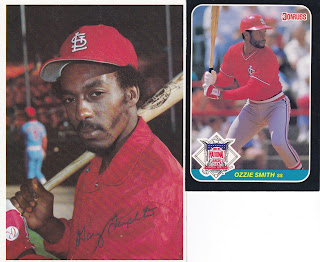 The Templeton is a gray back version just like the Hernandez.  The Ozzie is an oversized 1987 Donruss All Star.  At the time of the trade in February 1982, Ozzie wanted a new contract from the Padres while Templeton had worn out his welcome in St. Louis by flipping off fans 3 times during a game in 1981.  I am pretty sure most fans see the trade as a landslide win for the Cardinals.