Opening Day and a PWE

Early last week I bought into a box break of 2021 Topps Opening Day.  It was a cheap break that was opened on opening day.  What better way to celebrate the first games of the season than watching someone open cards for you.  This break was for a single hobby break where $9 got you 1 team of your choice and a random team.  The Cards and the Rockies were my 2 teams.  Here is how I did. 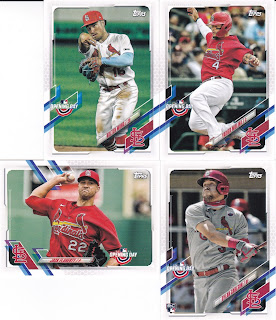 Each hobby box has 36 packs containing 7 cards. There are 220 cards in the base set.  Each pack contained 1 insert, so you would think out of the remaining 216 you would come close to a complete set.  Not so with this box.  The left side of the box was almost identical to the right side.  There are 6 Cardinals in the set not counting variations.  I received these 4 to go along with duplicates of all of them except the Carlson.  For the Rockies, I received 2 each of the same 3 base cards.  Big fail to Topps on this one. 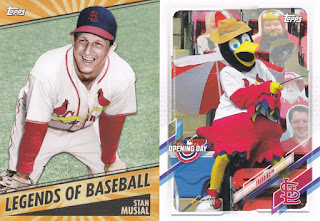 I did get a couple of nice Cardinals inserts and a Dinger card that was sent to Johnny along with the Rockies base cards.  The Mascot cards are always fun.
The same day the Opening Day package arrived I also received a pwe from The Bench member hociman. 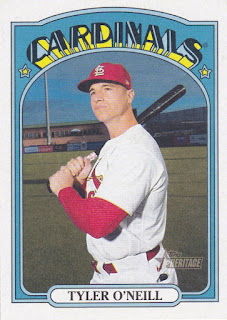 Other than a few cards from my 2 blasters, I have not received any 2021 Heritage Cardinals.  There are plenty out there other than the 2 short prints, I have just been too lazy to trade for them.  Guess it is time to get started. 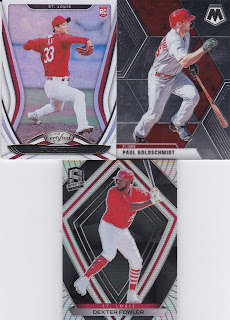 2020 Panini Chronicles had a ton of nice looking cards.  There are quite a few different brands to chase down.  The Fowler Spectra is just as thick as a game used card.