Playing Catch Up With a Trio of Trades

Even though it has only been 5 days since my last post, it feels like I am getting very behind.  I have 7 different trades and another pickup that I need to recap, but extra time has not been my friend of late.  My daughter is finishing up her high school volleyball season with 3 games last week and this week.  I was also gone all weekend for my son's first travel baseball tournament of the year.  The neat freak in me cannot stand to see all the different stacks of cards on my desk so I woke up early this morning and scanned 3 trades that came in last week.

First up is pwe trade from TCDB member cdorso. 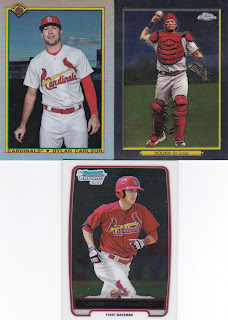 On top are a couple of nice 2020 inserts of 2 of the better 2021 Cardinals so far.  The Cardinals offense is either hit or miss this year.  Sunday's game they managed only 2 hits, but last night they hit 5 home runs and score 12.  The bottom 2012 Bowman Draft Chrome finished my team set.
Next up is another 3 card pwe trade from TCDB member Jquirp001. 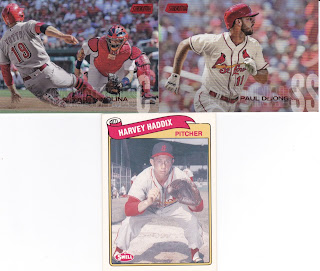 The Red Foil Stadium Club cards look so awesome paired with the Cardinals uniform.  I would not give Topps an A+ very often, but these cards are worthy of it.  The Harvey Haddix completed my 1989 Swell Baseball Greats team set.
The final trade was a 2 card swap with The Bench member ripahl. 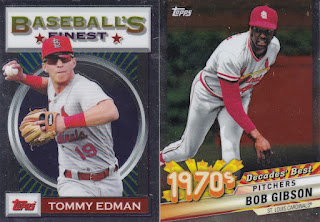 The 2020 Finest Flashback  Edman card is not as off centered as my scanner made it look.  For some reason it cut off the left side.  Edman is doing well in the lead off spot replacing Kolten Wong.  He was slated to spend most of his time at Wong's old spot at second base, but injuries to Harrison Bader and Tyler O'Neill have moved him to the outfield for now.  As long as he keeps hitting, I don't care where he plays.  Gibson had more success in the 1960s than the 1970s, but Topps did not see it that way.  It is still a nice insert.