I hope everyone enjoyed their Easter weekend.  I held a cookout for my immediate family Sunday evening.  It was the first time since last July that some of us were able to get together.  Not everyone could make it, but the 16 of us that did had a great time while enjoying the beautiful weather outside.

It was also great to watch Cardinals baseball.  Even though the Reds murdered their pitching, it was fun to see some runs scored and see the benches clear on Saturday.  The Cards did bounce back last night against the Marlins to even their record at 2-2.

Of course it would not be a weekend without some baseball cards.  On Saturday I received a pwe from TCDB member Johnsogr. 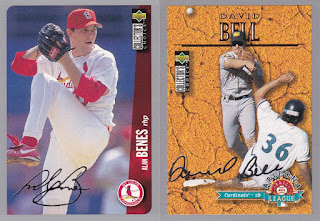 My wantlist is getting smaller for the 1996 Collector's Choice Silver Signature team set.  Only 5 more left to complete the 26 card set. 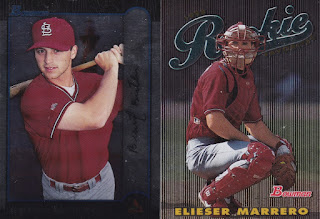 I am also filling holes in my Bowman International sets.  The Butler card is from 1999.  The Marrero is a 1997 Bowman insert. 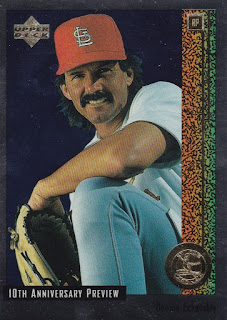 There are not too many inserts or parallels of Eck as a Cardinals, so it is nice to add one when I can.  This is a 1998 Upper Deck 10th  Anniversary Preview card. It makes me feel old to think it has been 10 years since Pujols played a game for the Cardinals.  I doubt it will happen, but it would be great to see him play one more game in St. Louis before he retires.  This 2009 Topps Update Propaganda insert captures him staring down what looks like a home run. 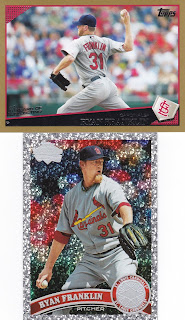 Finishing up the package are a couple of Ryan Franklin parallels.  Anyone want to guess what product Topps will put the 10th Anniversary Diamond Anniversary parallel in this year?