My birthday was the last week in October.  At 45, I am not sure why some people feel the need to get me something other than a card.  Both my parents and in-laws slipped some cash in my card, so of course like a little kid I felt the need to spend it right away.  I made an impulse buy and bought a newly released hobby box of 2021 Topps Heritage Minors.  I have always wanted to bust a box of this, and the price was a lot lower than most current hobby boxes.  I did pay a small premium by ordering directly from the Topps website, but the box was delivered in 3 days so I can live with that.  My son and I busted the box early last week. 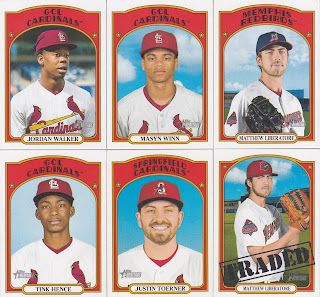 We pulled 6 of the 8 Cardinals from the set.  Need to track down Ivan Herrera and the Nolan Gorman short print to complete the base set.  I was glad to see we did not receive any duplicates from the box. 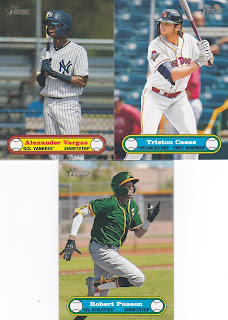 Instead of the customary oversized box topper card, Heritage Minors has a 3 pack of these cover cards.  Nothing too outstanding about these.  I would have preferred another standard pack. 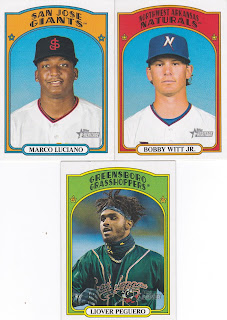 Short print odds are 3 per box.  It was great to hit a big name like  Witt Jr.  Maybe I can flip one of these for the Gorman I need. We also received the 3 expected Boyhood Photos inserts.  I had to do a double take of the Garrett Anderson card when I say the Cardinals uniform. 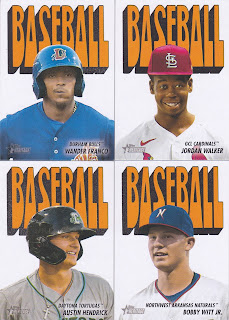 We did very well with the Pack Cover inserts pulling a nice Walker for the Cardinals collection along with Franco and Witt Jr. 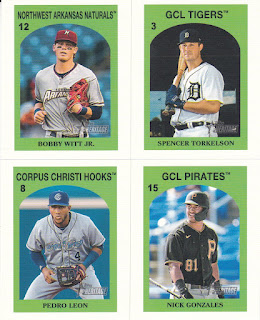 We hit another Witt Jr from the Venezuelan Stamp cards.  The Tork is pretty nice also. 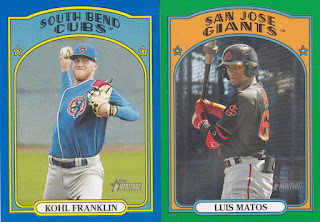 Most box breaks I have seen yielded 2 or 3 colored parallels.  We received a blue numbered to 99 and a green numbered to 75.  I don't know much about either of these guys, but did find out Matos is the Giants #3 prospect.  May have to hold onto this one for a bit to see how he pans out. 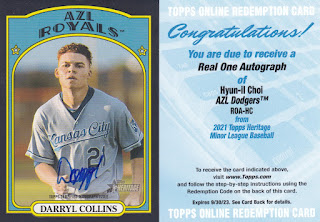 Each box contains 2 autographs.  We did ok pulling a black numbered to 50 and a redemption.  Neither one of these guys are big name prospects, but they are both pretty young so that could change in a year or two.
It was fun busting an entire hobby box.  We have only done this one other time in the last few years.  It was funny watching my son open his share of packs and having no clue who most of the players were.  I told him to pick 3 random guys and follow their progress next year.  That should give him something to look forward to next minor league season.