Last summer I won large EBAY lot that contained quite a few Shohei Ohtani cards.  Thanks to his great 2021 season, I have been able to trade away most of them for Cardinals that I need.  I did have a few of them left that I sent to TCDB member sfurukawa last week in exchange for some Cardinals needs. 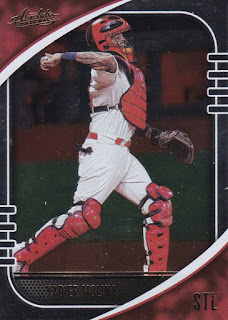 I have not seen too many 2021 Absolute hobby cards for trade.  There is a ton of the retail version available. 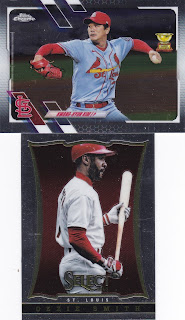 I finally finished my 2021 Topps Chrome team set with this Kim card.  It never fails that the last one seems to take the longest to track down.  The Ozzie Smith card is from 2013 Select.  This is another set I do not see too many cards for trade from. 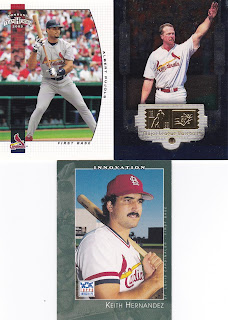 The last 3 cards are all former Cardinals first basemen.  Pujols knocked my 2005 Team Heroes needs down to 2.  I am down to just 1 more McGwire from the 1999 SPx set.  I have never seen the 2001 American Pie Hernandez before.  It is amazing how many different cards were produced in the early 2000s.  According to TCDB, there were over 2,700 different Cardinals cards made in 2001.  I am sure there quite a few other low print run cards not in that total so it may be closer to 3,000.