I am not one to keep up with a regular theme posting schedule, but it seems most Tuesdays I recap a couple of small trades.  Not sure how long I will continue, but I will keep it up for a second straight week with 2 more small trades.  First up is a couple of cards from TCDB member pdmkam. 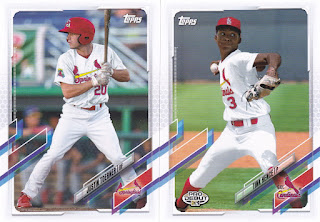 My 2021 Topps Pro Debut team set is now finished.  I have set a small goal to try to finish up a few team sets before 2022 rolls around.  Some should be easy, while others will be a little more difficult due to short print cards.

The second trade package came from TCDB member Tigers 727.  He sent 6 card, but 3 of them were not the correct cards.  He is making things right though by sending a nice 2014 parallel that I will show off later. 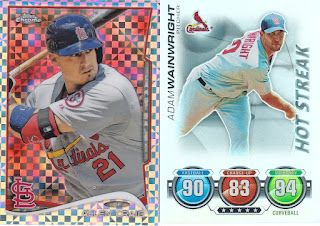 The Cardinals portion of the package included a 2014 Topps Chrome Xfractor and a 2010 Topps Attax Silver Foil card.  I never even heard of the Silver Foil parallels before this trade.  Shows you can learn something new everyday in the card world. 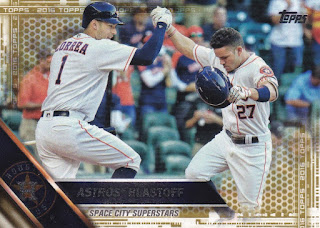 My son added this 2016 Topps Update Gold to his Altuve collection.  I doubt you will see too many more of his cards with Correa on them.  Unlike quite a few of the big free agents, I have not heard much news about him.  With the lockout looming at midnight Thursday morning, he may have to wait until it is over to sign.  There was a rumor he may go to Detroit, but they signed Javier Baez today.  I guess the Tigers could still sign him.  The Rangers signed two middle infielders in Marcus Semien and Corey Seager earlier this week.