How Long Will This Last?

The MLB strike happened earlier this morning just as most fans expected.  The length of it is anyone's guess.  I would say it will last into February.  I really cannot see either side wanting to lose regular season games.  Baseball has lost a lot of its popularity to the NBA and NFL.  Any delay of the regular season would make things worse.

The strike put a freeze to anything MLB related.  No trades, winter meetings, trades, etc.  Even the team websites are bland right now.  No pictures of any current players.  Only stories about the past.  At least we can continue to trade cards.  TCDB member DyeHardFan sent me a nice package of Cardinals earlier this week.  He is a true die hard MLB fan because he roots for the Royals.  Not too many of those fans around. 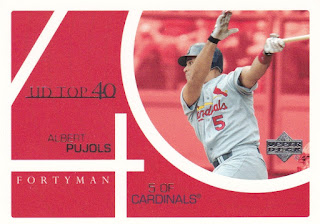 A lot of Cardinals fans are hoping the new CBA will include the DH coming to the National League.  This would allow St. Louis to sign Pujols and have him retire with Molina and Wainwright at the end of the season.  I am ok with that as long as he accepts a role as a pinch hitter and the salary reflects that.  No way he should take playing time away from Paul Goldschmidt.  This 2003 UD 40Man card knocks my team set needs down to 7 out of 29 Cardinals. 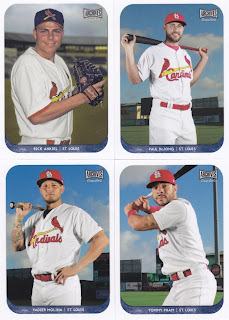 This trade started and finished my 2018 Archives Snapshots set.  This was an online only set that I doubt too many collectors broke.  A 12 card box was $25 before tax and shipping.  No thanks. 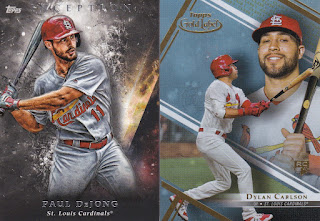 I consider Inception and Gold Label premium brands.  I rarely find any singles at card shows.  The Dejong is from the 2018 set, while Carlson is from 2021.  It is nice to see Topps added the Class type to the front of the Gold Label cards again this year. 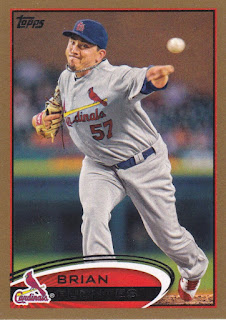 The only insert was this 2012 Topps Update gold.  I still think the border is more bronze than gold.