I am sure a lot of collectors are like me and miss the Pinnacle Museum inserts from the mid 1990s.  I believe it was the first time the dufex technology was used on cards.  It is getting harder to find these inserts now that they are over 25 years old.  Trading Bases member Brian A was attempting the 1994 and 1995 sets, but decided to pursue other things.  We worked out a trade for a few Cardinals that I needed. 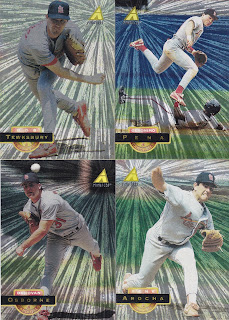 1994 was the first year for Museum Collection parallels.  The estimated print run was 6,500 copies.  Not very scarce by today's standards.  The Pena card is my favorite of this group.  You do not find too many cards that picture second basemen after a throw to first. 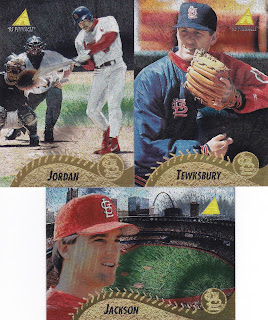 1995 Museum Collection is more colorful than 1995.  The dufex finish comes from the team logo instead of the brand logo at the top like 1994.  Brian Jordan is the best of this bunch.  Great shot of the moment just before contact.  The Jackson card is a close second with a nice stadium shot and the Arch in the background.