First Package In A While

With these uncertain times we are going through right now, some collectors have scaled back or completely shut down trading.  I have slowed down some what, but am always looking for Cardinals I need.  I will be a little hesitant to trade with some people based on their location.  I have not seen an definite information if the virus can be transmitted through the mail.  With that being said, I am not looking to receive anything from New York at this time.  Good thing TCDB allows traders to enter their location.

My latest package arrived Monday from member grim25 out of South Dakota.  His hometown has a population of less than 5,000, so odds are things are pretty safe. 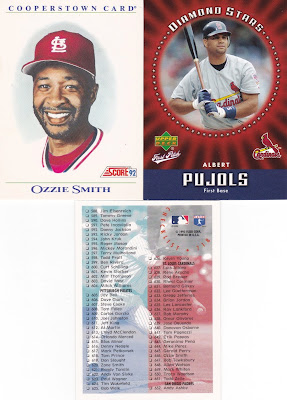 I have never seen this 1992 Score Factory Insert Ozzie before.  Hard to believe that there are still new cards to be discovered from the junk wax era.  The Pujols is number 898 in my collection.  I am sure there are at least 100 more of his cards in a Cardinal uniform that I can need.  The last card is a boring checklist from 1994 Fleer.  I am one of these weird collectors who adds the checklist to a team set. 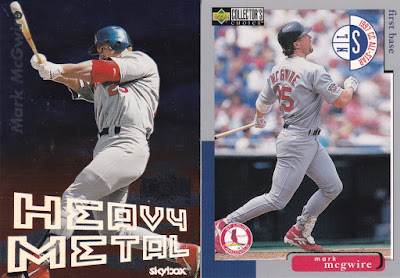 Just like Pujols, there are a ton of McGwires I can still chase.  I have a little over 700 of his cards.  The 1998 Collector's Choice has 2 different versions.  The back can feature a normal diamond shaped hologram, or a home plate hologram.  I was too lazy to show the home plate hologram on this one.  From what I have read, it is a little harder to find. 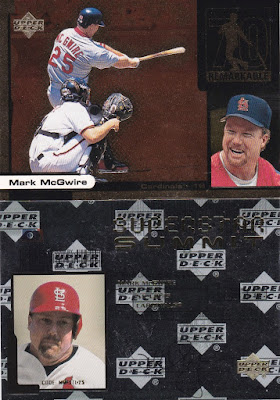 Out of the 4 major companies at the time, I bet Upper Deck cranked out the most McGwire cards in the late 1990s to early 2000s.  They had a ton of McGwire themed sets or subsets like the top card from 1999 Ovation Remarkable Moments set.  There were also a ton of inserts like the the 2001 Superstar Summit from the base set.  According to TCDB, from 1999-2001 there are over 2,400 different McGwire cards.  Those numbers should keep me busy for a long time.
Posted by CardinalsFan16 at 12:16 PM