Last night I had a pwe arrive from TCDB member Trinitydawg22 that contained a couple more colored Topps parallels. 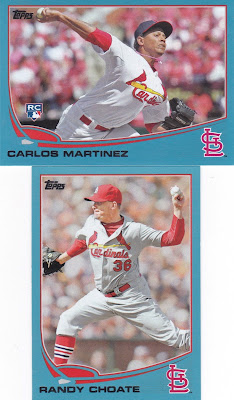 These are from the 2013 Update set.  Martinez look very young in this pic.  Choate spent his last 3 seasons in St. Louis as a LOOGY.  I wonder if he would have lasted 15 years in the Majors if the new 3 batter rule would have been in place while he played. 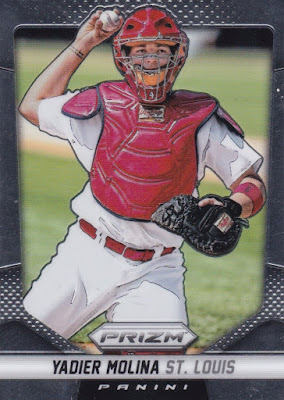 I was able to complete my 2014 Prizm team set.  Pretty boring design.  About the only positive is the chrome finish. 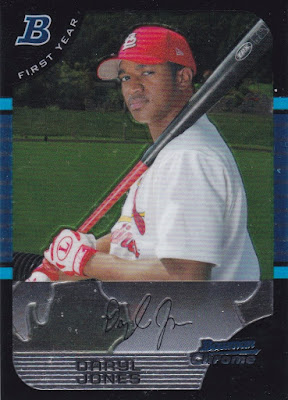 Jones was one of the better Cardinals prospects around the time I really starting following the minor leagues.  He was one of those guys that had all the tools, but could never put things together.  He was a 3rd round pick in 2005 that never reached the big leagues.  Good thing I did not invest in his 2005 Bowman Chrome Draft cards.  This one is my first. 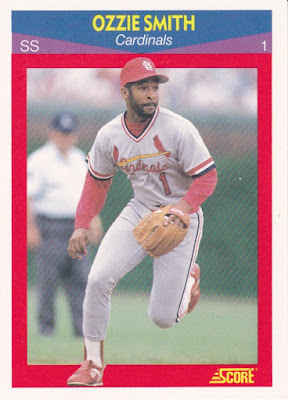 After the 1987 season, Ozzie was about the only high profile Cardinals to stick around for awhile.  Guys like Willie McGee, Tom Herr, and Jack Clark were gone soon after.  Being the only good player on some bad teams meant Smith had a ton of cards like this 1990 Score Superstars.  I have a little over 600 different Ozzie cards in my collection.  That is not even 10% of his total cards listed on TCDB.   Topps had been including him in a lot of base sets the last few years.  I won't complain.